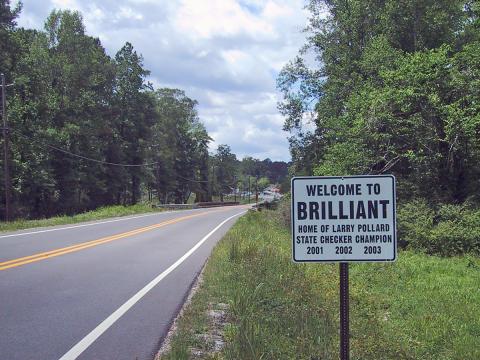 Brilliant - A family will have roughly 80 acres of land de-annexed from the Town of Brilliant.
Six tracts of land belonging to the Wild’s family will be removed from Brilliant’s incorporated limits effective Aug. 1.
The land was de-annexed through a local act of the Alabama Legislature, Senate Bill 331, which was passed by the lawmakers on Friday, May 8. The bill was made into law on the last day of the 2020 Legislative Session (Monday, May 18).

According to the Alabama League of Municipalities, property can be de-annexed from a municipality either by an act of the Legislature, as a result of a civil court ruling or by an act of a city or town council.
The Wilds family has been attempting to get out of the town for the past two years, arguing that the town has not lived up to its promise to provide water. The Brilliant Town Council has been split on the issue and has not been able to reach an agreement.
Family spokesperson Jason Wilds, owner of Wilds Horse & Cattle Company, says the family sought legislative action during this year’s session as the Brilliant council is in gridlock.

The bill was introduced by Marion County senators Larry Stutts, R-Tuscumbia,  and Garlan Gudger, R-Cullman, and received unanimous support in the State Senate. The bill received one no vote in the State House from Marion County Rep. Tracy Estes, R-Winfield.
The bill was published in the Journal Record four consecutive weeks beginning Feb. 19. According to Stutts and Wilds, state law requires the Town of Brilliant to pay the bill, which totaled $2,519.
Brilliant Town Attorney Bill Atkinson says it is his understanding that de-annexing the Wilds’ property will not affect other properties’ status in the town should they become noncontiguous through the act.
The Wilds’ properties were annexed into the Brilliant Town Limits in 2007, according to Jason Wilds.
However, after six years of waiting for Brilliant water to be run out to them, a well on their land had gone dry and they needed water access immediately and the family paid $15,000 to have the City of Winfield extend its water system three-quarters of a mile out to his property.
The Wilds family approached the Brilliant council in July 2018, requesting a vote from members to remove their land from the town. After several council meetings where the matter was discussed, the family was told no.
Jason Wilds told the Journal Record he believes “right” has won as a result of the act.
“We have Winfield water, Marion County garbage, a Winfield phone number, and a Guin address, but the Brilliant Council still thought we should pay them taxes on our land!” Wilds said.
According to Wilds, two councilmen told him they would feel as he did if they were in his situation. However, both of them were not supportive of de-annexation as they were “looking out for the Town of Brilliant.” Another told him “this is just business.”
“All that means is that it’s okay to take tax money from an individual unjustly if the town benefits,” Wilds said.
Wilds said town councilors Chip Pollard and Heath Sanderson were supportive of him and attempted to help reach a compromise with the other council members.
Other members on the town council include Ricky Pollard, Charles Berryhill and Lori Colley. Perry Franks serves as Brilliant’s mayor.
Numerous phone calls for statements from the Town of Brilliant and Franks were not returned.

Wilds commends lawmakers for efforts
Wilds noted that he was raised in Brilliant and still loves its people despite the situation. He says since the string of council meetings in 2018, he has gone to the mayor and council members to make peace with them.
“I had a cordial visit with each of them, and we left each other with a handshake. I refuse to hold a grudge and I refuse to have hatred within me,” Wilds said. “I still consider them friends, and I also consider this water under the bridge.”
Wilds commended Stutts for his efforts in the situation.
“No matter the consequences, popular or unpopular, Sen. Stutts saw what was the right thing and went with it. I wish all of our elected officials could make that kind of stand.  Just do what’s right for your people.  Make a stand for them,” Wilds said.
Wilds said Estes, made a “valiant effort” to get the council to reach a compromise.
“We even thought he had it worked out, but it fell through,” he stated. “He (Estes) even tried to set up a meeting for us to work this out peacefully, but he was told that they had talked enough. The mayor and the majority of his council wanted to keep us in no matter what.”

Stutts carried bill after another attempt
Stutts told the Journal Record that he was approached by Jason Wilds during the 2019 Legislative Session. At that time, the state senator said he asked the landowner to continue attempts to work out a deal with the town.
While Stutts says he is a strong proponent of private property rights, he didn’t want to get involved in the local issue. However, Wilds approached him again in January telling him that the town council was still unable to reach an agreement.
At that time, Stutts said he reached out the town’s attorney, Atkinson, asking if anything could be done. Stutts said Atkinson attempted another measure to get the council to agree on a deal, but nothing was successful.
The senator said it was at that point he agreed to introduce the bill during the 2020 legislative session.

Estes votes no, says issue was local
Estes told the Journal Record he has been working with both Brilliant officials and the Wilds family since before he was sworn into office, attempting to work out an agreement.
The Winfield representative says his vote against the bill was not a vote against the Wilds family but against settling the local issue at the legislative level.
“I didn’t think this was the best way to do it. This wasn’t a legislative issue it was a local issue, and I still feel like a local agreement was possible,” Estes said.
At one point, Estes says that he was able to bring together a compromise between the two parties to remove portions of the family’s land and allow the town to retain about 25 acres. Estes says he doesn’t know why, but that deal fell through.