By Louis Mellini
Staff writer
HAMILTON — The Journal Record is excited to announce that, this school year, we will be bringing back our school page!
Each week, one of our schools in Marion County will be featured on a page of the Journal Record with school news and pictures of students and faculty.
This is something that the Journal Record has done in the past, and we are excited to bring the news of what the kids and young adults in the county are doing in our great schools. Ashley Pool, left, will be stepping down as CEO of Lakeland Community Hospital soon. Taking her place is Jennifer Young, right, a native of Hamilton.

By Shelly Hess
Courtesy of the Northwest Alabamian
HALEYVILLE — Lakeland Community Hospital will soon experience a change at the helm, but the focus on high quality patient care will remain the same.

By Louis Mellini
Staff writer
HAMILTON — The City of Hamilton will now be using Northstar Emergency Medical Service and will establish the Marion County EMS ambulance service for the City of Hamilton following the Hamilton City Council meeting on Monday, Aug. 1, at Hamilton City Hall.
The city previously used Regional Paramedical Services for all of their emergency transport needs, but, according to Hamilton Mayor Bob Page, the city was not satisfied with the time it took for ambulance services to respond.

New security cameras at Wal-Mart in Hamilton will scan tag numbers at the entrance and exit to help law enforcement.

By Luke Brantley
Staff writer
DOTHAN — Winfield’s 8U Dixie Youth baseball team finished as runners-up in the 2022 Dixie Youth Division II AA World Series on Tuesday, Aug. 2, in a narrow loss to North Carolina, wrapping up a 23-3 record season.
The team advanced to the World Series after defeating Fayette in the state tournament on Monday, July 11. They went on to represent the state of Alabama in the World Series starting on July 27. From left are Roger Satcher, his son Asa Satcher and his wife Lea Able Satcher. Roger is a native of Stonewall, Miss., and has 37 years of coaching, teaching and administration experience. 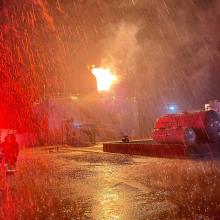 A fire occurrs at the Tennessee Gas Pipeline Company of Kinder Morgan on County Highway 56 in Shottsville Saturday night.

By Louis Mellini
Staff writer
SHOTTSVILLE — Both the Shottsville and Byrd fire departments were called to a major emergency situation during the stormy conditions that occurred on the night of Saturday, July 30.
Shottsville Fire Department was the first to arrive on the scene to respond to the fire located on County Highway 56 at the facility operated by the Tennessee Gas Pipeline Company of Kinder Morgan.
“We just saw a big ball of fire on top of one of the buildings,” said Shottsville Fire  Chief Jeff Williams. 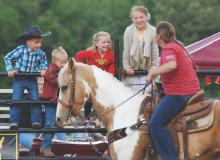 Children enjoy the Marion County Stampede that took place just a few months ago. Gann aims to get youth interested in horse competitions.

By Louis Mellini
Staff writer
HAMILTON — After the massive success of the Marion County Stampede just a few months ago, county resident Jamie Gann plans to bring more horse events on a more regular basis to the youth and other residents of Marion County.
During a regular meeting held on Monday, July 18, at the commission office in Hamilton, Gann suggested that the county lease him property located just off of Highway 43 South. Wes Spiller from ALDOT discusses the traffic signal during a recent council meeting.

By Louis Mellini
Staff writer
HAMILTON — Hamilton business owners Watha Williams and Darryl Crabtree voiced their concerns about the potential removal of the stop light located on First Avenue Southeast in downtown Hamilton.
In May, Hamilton Mayor Bob Page and the Hamilton City Council voted to take down the stop light on First Avenue Southeast in order to alleviate traffic that builds up on Military Street’s main intersection near the Marion County Courthouse. By Louis Mellini
Staff writer
HAMILTON —Hamilton resident James Ray McCracken was arrested on suspected murder in the first degree charges this weekend on Saturday, July 23, in Hamilton.
The Hamilton Police Department, along with the Marion County Sheriff’s Department, made the arrest on the day of the incident.
McCracken, 77, born in November of 1944, is currently being held in the Marion County Jail in Hamilton on a $500,000 bond.

By Louis Mellini
Staff writer
HAMILTON — Miss Hamilton, Emee Baldwin, and Miss Hamilton’s Outstanding Teen, Harper Howard, attended the Hamilton City Council to speak to the mayor and council about their time in Hamilton and their goals after winning the competitions.

Marion County is in a minor drought condition, facing abnormally dry to moderate drought this season.

By Louis Mellini
Staff writer
MARION COUNTY — The heat in Alabama, while not entirely abnormal for a July in the state, may have some farmers and gardeners slightly worried about droughts in the area.
While Marion County has certainly been no dust bowl this year, a recent report by the U.S. Drought Monitor shows that Marion County is facing abnormally dry to moderate drought this summer. Justin Cottingham eases around the corner just out of a classroom in the hallway of Winfield City High School during a SWAT training exercise.