Shown is the eastern side of the Boston Theatre.

By Luke Brantley
Staff writer
BOSTON —  Don’t get Boston and Brilliant confused! There’s a difference—at least…there used to be.
Before the mines shut down and the two communities were incorporated into Brilliant, there used to be the Town of Boston, Alabama, located where downtown Brilliant is today. Brilliant, back then, was the area closer to where the high school stands today. 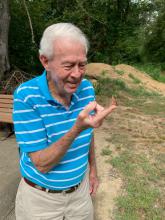 WINFIELD —  Donald T. Studdard was born in Howard (Fayette County), Alabama in 1934.  He passed away November 16, 2022.
Studdard’s early years were spent in Jasper, where he attended elementary, middle and high school, and Walker College.  He began his career at Alabama Power Company, Gorgas Coal Mine.

By Louis Mellini
Staff writer
HAMILTON — Hamilton’s annual Christmas parade was postponed after some chilly and rainy weather blew through Hamilton on Monday, Dec. 5. Hamilton Mayor Bob Page stated he and councilman Scott Tyra were working with the Hamilton Area Chamber of Commerce, who organizes the event every year, to choose a new date.
The announcement for the new date occurred past press time Monday.

The Town of Hackleburg is in the process of gathering a petition whether or not to vote to go wet to sell alcohol or remain dry.

By Louis Mellini
Staff writer
HACKLEBURG — Just weeks after Bear Creek voted no on selling alcohol within their city limits, the Town of Hackleburg is taking signatures on a petition for the same vote.
Currently, Hackleburg is what’s known as a dry town, leaving businesses unable to legally sell alcohol within the limits of the town.

By Louis Mellini
Staff writer
HAMILTON — Residents on the east side of Hamilton will be glad to hear that Hamilton’s newest Dollar General has completed construction and is now open for business.
Signs went up Thursday, Nov. 17, and the store opened Nov. 21, on Hamilton’s Bexar Avenue East. 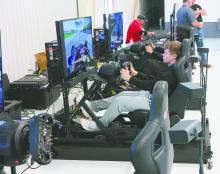 Two students put the pedal to the floor as they race simulated Formula 1 cars around a racetrack during the career event.

By Luke Brantley
Staff writer
BEAR CREEK – Phillips High School students had the opportunity to learn more about possible college and career paths at a career expo on Friday, Nov. 18.
Representatives from Honda, numerous programs from Bevill State Community College and other businesses were present to talk to students about their college and career options after high school.
Honda representatives presented students with information while they raced Formula 1 cars around a virtual track in a racing simulator.

Rob Swinney, shown left with his wife Donna, is the first speaker at the Bevill Brown Bag Lectures since the pandemic began. He gave a history on the Buttahatchee.

By P.J. Gossett
General manager
HAMILTON — The Hamilton campus of Bevill State Community College has recognized the rich history of Marion County in the past by presenting Brown Bag Lectures. Speakers were given a chance to talk to the public about historical topics of interest from all areas of the county and northwest Alabama. Unfortunately, the pandemic shut the lectures down, but they have now returned.

By Louis Mellini
Staff writer
BRILLIANT — The Northwest Alabama Resource Conservation and Development council announced that over $76,000 in grant funding  helped complete 13 projects in this year with help from Alabama legislators.

By Chad Fell
Courtesy of the Northwest Alabamian
BEAR CREEK — Church members across denominations in Bear Creek banded together voicing their disapproval and ultimately voting down a referendum that would have allowed for the sale and distribution of alcoholic beverages in the town limits during a special election, Tuesday, Nov. 15.
A total of 104 voters cast their ballots in the election, which was held at the Bobby Bishop Community Center, with 64 voting no and 40 voting yes, when all the figures were counted by poll workers then posted on the community center door.

From left, Mayor Bob Page, Fred Hunter from WBRC’s Absolutely Alabama and Mrs. Claus gather to celebrate the lighting of the Christmas tree.

By Louis Mellini
Staff writer
HAMILTON — The Holiday season has arrived in the City of Hamilton as Mayor Bob Page invited the community to city hall to celebrate the annual Christmas tree lighting.
The event, held outside of the city hall building in Hamilton, was on Tuesday night, Nov. 15.

The new traffic lights are a result of the damage downtown Winfield suffered from a small tornado which breezed through after Christmas last year. The light poles are seen being cut out of the roadway shortly after the tornado.

By Luke Brantley
Staff writer
WINFIELD — New traffic lights should be installed around the first week of December, barring any more delays, according to Winfield Mayor Randy Price.
Price said during a city council meeting on Tuesday, Nov. 15, that the installation of new traffic lights had been briefly delayed.
The traffic lights at the main intersection in downtown Winfield were damaged by an F1 tornado on Wednesday, Dec. 29, 2021.

Larry Akers, right, is sworn in by Judge Mark Hammitte at the Marion County Commission Office in Hamilton.

By Louis Mellini
Staff writer
HAMILTON — Two new commissioners took to their seats as all commissioners were sworn in before the Marion County Commission meeting on Wednesday, Nov. 16, at the commission office in Hamilton.
Both Larry Akers and Greg Gunnin got their feet wet in their first meeting, setting rules of order for the next term. MARION COUNTY — Marion County and the State of Alabama are still red after the 2022 midterm elections on Tuesday, Nov. 8. In addition, several amendments were on the ballot, all of which passed, including Aniah’s Law with 80.5 percent of the vote.
HAMILTON — After a five year stint out of partnership, Hamilton is back with the Northwest Alabama Economic Development Alliance (C3).
HAMILTON — Hamilton’s plans to honor U.S. veterans this year turned out to be a major success this Veterans Day at the Bevill Community Center.

GUIN — The Marion County High School Red Raiders are advancing to the third round of the state playoffs after a 27-6 victory over the visiting Valley Head High School Tigers on Friday night, Nov. 11.
HACKLEBURG - The Sonny James Post 165 in Hackleburg will be conducting sales for the 2022 Wreaths Across America campaign this month at 314 First Avenue. 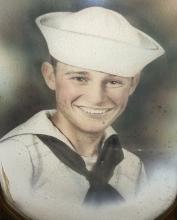 By Luke Brantley
Staff writer
APRIL 1, 1945, OKINAWA, JAPAN —  World War II was ending. The war in Europe was drawing to a close with Germany on the verge of surrender, and now the island of Okinawa stood as the final barrier between U.S. forces and the Japanese mainland.
After over a week of naval bombardment, U.S. troops made landfall. It would be one of the bloodiest battles of the war in the Pacific, with U.S. troops sustaining around 50,000 casualties as the battle raged through April and May, then into June.

Guin has received a grant of $407,000 to install six electric vehicle charging stations. The exact location is not yet known.

By Louis Mellini
Staff writer
GUIN — The City of Guin received a grant of $407,000 from the Alabama Department of Economic and Community Affairs to install six new electric vehicle charging stations possibly at exit 26 on I-22, where the Holiday Inn in Guin is located.
State Representative Tracy Estes (R-Winfield) stated he was informed of the awarding of the grant on Monday, Oct. 31.

By Louis Mellini
Staff writer
HAMILTON — Marion County Sheriff Kevin Williams and the Marion County Commission joined with government officials and leaders in the county to celebrate the groundbreaking of the new Marion County Jail in Hamilton.
The event took place at the future jail site located at the Bedford Industrial park in Hamilton located near Marion County DHR Friday, Nov. 4.