VERNON - A Lamar County has been sentenced to life in prison for attempted murder for his actions involving kidnapping a woman from a store in Hamilton.
Marshall Lee Gray, 33, Vernon, pled guilty to attempted murder on Oct. 28 in the 24th Judicial Circuit Court held at the Lamar County Courthouse in Vernon and was sentenced to life in the custody of the Alabama Department of Corrections, according to a press release issued by Andy Hamlin, District Attorney of the 24th Judicial Circuit Court.

HAMILTON - On Saturday, Dec. 7, the Hamilton Civitan Club and Bevill State Community College-Hamilton Campus will hold their annual Breakfast with Santa event, which will take place from 8 - 11 a.m. in the Bevill Business and Community Center on the north end of the campus.
Children 12 years and under will be admitted for free, and attendees over 12 years old will be admitted for $5. Tickets will be sold at the door.

Cold weather on Wednesday, Nov. 13, broke records, according to National Weather Service Observer Eddie Pearce.
Pearce said temperatures dropped to 13 degrees on Nov. 13, bringing trace amounts of snow and breaking the previous record for November, which was set in 1968 when 17 degrees was measured.
The record high for the month of November was set in 2016, when 91 degrees was measured on Nov. 1.
Pearce said this is the second-earliest signs of snow on record. The earliest occurred in 1966, when snow was measured on Nov. 2.

Heating ductwork is shown branching out to Winfield Elementary School from two mobile boiler trailers rented from a company in Louisville, Ky. The units will temporarily provide heat for the school as its boiler has failed.

WINFIELD - A heating malfunction resulted in all of Winfield City Schools being postponed and delayed last Tuesday and Wednesday, Nov. 12 and 13.
Many schools across north Alabama announced closures early last week due to wintery conditions. However, the Winfield closures were due to more complex—and costly—circumstances.

HAMILTON - Belinda McRae, a Hamilton native and long-time educator, is unopposed in her bid for a seat on the Alabama State Board of Education.
There is, however, non-candidate opposition for McRae—a referendum on the primary election ballot in March to make state school board seats appointed offices instead of elected.
If the amendment passes, all  sitting school board members will be removed and Gov. Kay Ivey will begin an appointment process.

HAMILTON - A Hamilton man is being charged with two counts of first-degree rape for allegedly performing sex acts on his girlfriend while she was incapacitated on drugs. Adam Blake Kivette, 33, Hamilton, is being held at the Marion County Jail in Hamilton on a $400,000 bond for the rape of a 35-year-old Hamilton woman. Hamilton Police Department Investigator Scotty Chandler told the Journal Record Kivette was charged with both counts of rape on Nov. 6. Kivette was already in custody at the jail for unrelated misdemeanors.

HAMILTON - Marion County Schools collected a record $1,774,113 in education sales tax in Fiscal Year 2019. Marion County Superintendent of Education Ann West announced the collection at the Marion County Board of Education’s monthly meeting held on Wednesday, Oct. 23. The new record of $1.77 million dwarves the previous record set last year of $1,714,333 by nearly $60,000. The school system collected a record $154,823 during the month of September—$6,900 more than the previous year. In September 2018, education sales taxes generated $147,930.

WINFIELD - Hamilton pharmacist Cole Sandlin says that patients in Marion County are now set to receive better care from not only physicians, but the pharmacists themselves after two bills were recently signed into law in Montgomery.
Sandlin was present when Gov. Kay Ivey signed into law HB35, known as the Collaborative Practice Act, and SB73, the Pharmacy Benefit Managers (PBMs) Licensure and Regulation Act, during a bill-signing on Aug. 31.

Nick Lolley (right) is shown with the director of the Marion County Emergency Management Agency, Jimmy Mills (left). During Lolley’s upbringing in the City of Hamilton, Mills was a mentor to Lolley during their time together at the Hamilton Fire and Rescue Department.

HAMILTON - Nick Lolley, 34, is the director of the Tuscaloosa County Emergency Management Agency. He was born on April 4, 1983, in Tupelo, Miss., to Hamilton residents Kenneth “Junior” and Patsy Lolley. Lolley spent his youth being raised in Hamilton, where he met several men and woman who, according to Lolley, shaped his life and his work ethic, making him the man who he is today.

HAMILTON - The Appalachian Regional Commission (ARC) has awarded a $774,912 grant to Tombigbee Electric for the ongoing project known as FreedomFIBER. The fiber optic network project will potentially provide high-speed broadband service to 925 unserved businesses and 30,495 households in areas of Marion, Fayette, Franklin, Lamar and Winston counties.

MONTGOMERY - Alabama’s county governments plan to improve 1,000 road miles next year with the proceeds of the new gasoline and diesel fuel taxes being paid by motorists.
In the 2019-2020 work plans adopted statewide, counties are scheduled to improve 1,013 miles of deteriorating county roads and to perform maintenance on 20 county bridges.
According to the 2020 County Transportation Plan, Marion County plans to resurface 3.32 road miles on County Road 14 for a project that is estimated to cost $900,000.

HAMILTON - For the week-period ending Thursday, Nov. 14, a total of $5,400 has been donated toward this year’s Christmas for Kids campaign.
Sandy Sandlin, coordinator of the campaign, says this year’s goal is $40,000 to help purchase holiday gifts for more than 400 children.
All of the money will go toward buying clothing and shoes for children.
Among those who have made the most recent donations are:

Bevill State Community College (BSCC) has received a “no recommendations” evaluation from the Southern Association of Colleges and Schools Commission on Colleges (SACSCOC) review committee.
The committee visited BSCC campuses and several off-site locations from Oct. 28-31 and issued an evaluation of  “no recommendations” for the college following their visit.
BSCC President Dr. Kim Ennis said the evaluation results were rare and  a tremendous accomplishment for Bevill State.

Hamilton - The Hamilton Police Department has been approved to move ahead with the hiring of a new police officer and the purchase of two new Chevrolet Tahoe police cruisers.
The Hamilton City Council voted unanimously on Monday, Nov. 4, to move forward on the addition to the police force.
At a work session on Wednesday, Oct. 30, Hamilton Police Chief Ronny Vickery said he currently has 13 officers—including himself and two investigators. 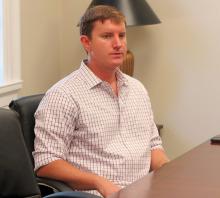 Samuel Bentley, Director of the Ramp School of Ministry in Hamilton, is shown during a meeting concerning the 2020 Census at Hamilton City Hall on Wednesday, Oct. 9.

MONTGOMERY - Gov. Kay Ivey has awarded $386,250 to support a network of 20 Community Action Agencies across the state that assist Alabamians by providing programs to reduce and eliminate poverty.
The Community Action Association of Alabama is using the funding to support programs offered by the local agencies to help low-income families improve their lives and achieve self-sufficiency.
This funding will also assist in the functions of the Marion-Winston Community Action Agency (MWCAA).

HAMILTON - ‘Tis the season for Christmas for Kids to partner once again with the Marion County Department of Human Resources and Christ Community Fellowship to help distribute Christmas gifts to children in need.
Officially launching in 1985, the charity is celebrating 35 years of generosity this year.
Prior to 2014, Christmas for Kids was helping provide Christmas gifts to children throughout Marion County courtesy of donations received from county and area residents.

HAMILTON - North AlabamaWorks, in partnership with Bevill State Community College-Hamilton, will host the Worlds of Work Career Expo for Marion and Winston County students on Friday, Nov. 8, from 8:30 a.m. to 12:30 p.m. at the Bevill State Community College Hamilton Campus.
This event will help students learn about high-demand, high-wage career opportunities available to them in Northwest Alabama.
Companies and organizations will provide hands-on activities in which they can participate, allowing students to explore potential careers.

WINFIELD - “I’m lucky to be alive and that’s what I convey in this book,” Lt. Larry Hunter (Ret.) said holding his newly published book, Fire Mission, Fire Mission!, while sitting in the den of his Winfield home.
Two large boxes filled with copies of the book sit nearby.
The book is about Hunter’s experiences during his tour of duty in Vietnam, “Where I almost lost my life,” Hunter said.
This weekend and the following Tuesday, Hunter will be speaking and signing copies of his book at various Veterans Day events around Marion and Winston counties.

HAMILTON - Marion County commissioners Bobby Burleson, Dale Holt and Keith Nichols approved Marion County Engineer Mike Shaw’s request to change job classification and adjust the pay of six of his employees during a regular meeting on Monday, Oct. 21, at the commission office in Hamilton.
Commission chairman Tim “Ears” Estes did not vote and commissioner Kenneth Cochran abstained from voting as his brother, Kent Cochran, was among the names involved in the pay adjustments.