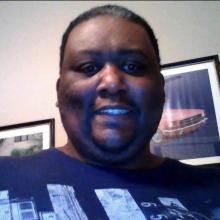 Marlon D. McFadden, 48, of Hamilton, passed away on July 25, 2022, at the North Mississippi Medical Center in Tupelo, Miss.
He was born on Jan. 15, 1974, to the late Condie McFadden Jr. and Annette Mosley McFadden. He was a member of Mt. Zion II CME Church. He had a unique personality that allowed him to never meet a stranger. He loved Mustang cars and also loved to customize them to his liking.
He leaves to cherish his memory, mother - Annette McFadden; sister - Michele (Russell) Burroughs; nephew - Connor; aunts - Marjorie Mitchell, Alma Miller, Diana Parks and Angela Mosley; and a host of cousins and friends.
In addition to his father, he was preceded in death by brother - Timothy McFadden; and his grandparents - Condie McFadden Sr. and Ellie Lee McFadden, Tessie Lee Mosley.
The funeral service for Mr. McFadden was held on Saturday July 30, 2022, at the Hamilton Funeral Home Chapel with burial following at the Memorial Gardens.
Hamilton Funeral Home
161 Falcon Circle
Hamilton, Ala.  35570
205-921-3197