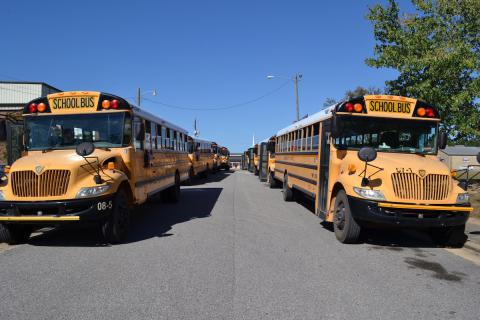 (Updated: Tuesday, March 17, 3:00 p.m.) - This article has been published in its entirety courtesy of the Journal Record. Updates will be made as soon as they become available.

Gov. Kay Ivey declared a state of emergency in Alabama on Friday, March 13, announcing that all public Pre-K and K-12 schools will be closed for 2 1/2 weeks beginning at the close of business on Wednesday, March 18.

The public schools will remain closed for three weeks through Monday, April 6. None of the days missed will require make-up days due to Ivey’s emergency declaration, including the three days extra taken by Marion County and Winfield City schools.

Standardized testing, athletics and events, such as senior prom and any plays that were scheduled during this time, have been postponed to an undetermined date.
Both county school and Winfield teachers reported to their schools Monday morning, March 16. Nurses were also on duty to pass out medications.
Marion County and Winfield City schools were both scheduled to begin their Spring Break on March 23.

Before the emergency declaration, school officials were preparing to take a softer approach in response to the outbreak.

West and Cook both spoke to the Journal Record before the emergency declaration on Friday, March 13, saying they had not yet been given word of schools closing.

Instead, they said individual school locations would close on a case-by-case basis should one of their respective students test positive for the virus. Both school systems were planning to continue school athletic schedules.

West said that the rapidly increasing number of cases led many superintendents to close early.
According to the Alabama State Department of Education’s website, 26 systems were shutting down their schools early.

All Marion County schools will serve lunch on Thursday, March 19, and Friday, March 20, between 11 a.m. and 1 p.m. The meal service will be drive-through-only pickup.  School staff will be standing in front of each lunchroom handing out meals to parents for the children 18 and under that are in the car beginning at 11:00 a.m. both days.  The United States Department of Agriculture requires children to be in the car with the parent to receive a meal. The meal service will include lunch and breakfast items.

“My thought process was that students have been at home for two days over the weekend away from school, why risk bringing them back for a day or two?” West said. “I did not want to be personally responsible to ask kids to come back to school and risk someone getting sick.”
West said the state-issued closure will impact senior trips for Hamilton, Hackleburg and Phillips.

Hamilton High School Principal Steven Deavours said his school’s senior trip has been rescheduled for May 9-16.

All county school proms will be affected by the closure, except for Brilliant High School, which hosted its prom on Friday, March 13.

West said school principals are working to reschedule the events. However, at this time, nothing has been set in stone.

“The whole purpose of this is to try and keep the virus from spreading,” West said.

West said, as of now, she has told teachers that if they choose to do so, they can work in their classrooms.

While it is not required, West said there are resources available for parents who would like their students to study at home.

She said while at home, county school students will still be able to access Classworks, Imagine Math, myON and Epic Books with internet access.

“This has been a rapidly changing event and I appreciate the patience of our parents who are working with us to try and do what is best for our children,” West said. “Most of all, we want to keep our students safe, health and well.”

West said parents and students can stay up-to-date with the system’s plans by following the school system on social media. She also said any updates would be sent out through SchoolCast telephone calls.

Cook stated that Winfield schools shut down earlier than recommended after speaking with nine other superintendents in the area.

“We just felt it was best to keep kids out of school since we were going to have absences excused anyway. We felt like a lot of parents would keep their children at home for precautionary reasons. We wanted to use this time to clean and disinfect and get our schools ready for kids to come back on April 6,” said Cook.

According to Cook, Winfield Middle School will serve lunch to those students who receive free meals or reduced lunches. He stated that they have three days’ worth of meals and, when those meals are depleted, will receive food from local food banks.

Cook stated that Winfield schools will arrange times for students or parents to come to the buildings to retrieve any property they may have left behind.

Winfield City High School had tentatively rescheduled its prom for tonight (March 18) due to the school closure announcement. However, the late March 15 decision to close schools the next day eliminated that plan.

“We’re getting information almost hourly about something, everything is changing rapidly,” said Cook. “We’re going to keep parents informed through our social media sites, so we will let them know of any sort of changes.”

Bevill State Community College-Hamilton courses have been moved to online from March 17-April 3. The college has canceled its baseball and softball schedules through March 30, per a decision by the Alabama Community College Conference.

The Ramp School of Ministry in Hamilton has also moved classes online through Wednesday, April 8.

Auburn University, Samford University in Birmingham and the University of Alabama (UA) System have suspended traditional classes and have moved classes online.