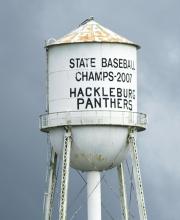 Hackleburg is considering their options for a dedicated ambulance service.

By Louis Mellini
Staff writer
HACKLEBURG — The Town of Hackleburg may soon be looking to have its own dedicated ambulance service serving the area. Mayor Darryl Colburn spoke with the Journal Record, stating that, while no official discussions have taken place, the town is considering looking at options to better emergency services for residents in the northside of Marion County. 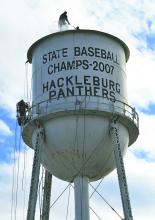 Crews began work early in the morning washing and painting the water tower and will continue to restore Hackleburg's water towers.

At the end of last year, Hackleburg, using their $300,000 American Rescue Act funds, began the project after failing inspections on two out of three of their water towers in the previous year.