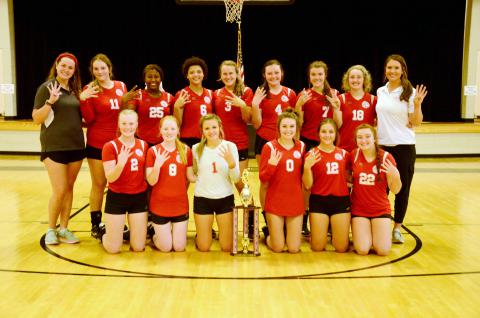 Hackleburg – For the fourth year straight, the Marion County High School (MCHS) Lady Red Raiders have a North Alabama Conference (NAC) Championship Volleyball trophy to add to their cabinet.
On Saturday, Sept. 11, the Lady Red Raiders, led by head coach Savannah Smith Fox, defeated the Hackleburg Panthers in the final match of the tournament. The tournament was held at Hackleburg High School and was a six-team double-elimination -style series.
In the first round of the tournament, The Phillips High School She Bears defeated the Berry High School Wildcats in two sets, 25-10 and 25-15, respectively.
Lynn High School was defeated in Round 1 by the Brilliant High School Lady Tigers, 25-20 in game one and 25-13 in game two.
Round two in the winner’s bracket saw Hackleburg High School defeat Phillips in two sets (25-19, 25-14), and MCHS ousting Brilliant in the same fashion (25-13, 25-13).
In the loser’s bracket, Lynn finished off Phillips in two games (25-14, 25-19), and Berry was ushered out of the tournament by Brilliant (no scores provided).
In the third round of play, the Hackleburg Lady Panthers were defeated by MCHS in a competitive three sets.
The Lady Red Raiders took Set 1 in a close win 32-30, and Hackleburg punched back in Set 2 with a walk-away 25-6 win. The third was claimed by MCHS in a narrow 15-13 victory.
Round 3 in the loser’s bracket saw Brilliant fall to Lynn (no scores provided).
The semi-final game was played against Hackleburg and Lynn in the loser’s frame, with Hackleburg being able to fight its way back to the championship game in two sets (25-14, 25-16) over the Bears.
Championship game
In the final game against MCHS, the Hackleburg Panthers took Set 1 in another close opening spread 27-25.
MCHS rebounded in Set 2, clinching the set 25-12. The third set solidified the Guin comeback with a 15-5 victory.
For the Lady Red Raiders, Erin Culp marked four aces, one assist and one block.
Lydia Gosa had two kills; Porshia Lipsey had one kill; Sarah Webb had one kill, four aces and one block; and Anna Rhea White had 11 assists and two ace serves. Serenity Metcalfe had four kills and one dig.
For the Panthers, Avery Harper posted three aces, three kills and two blocks. Kameryn Cleveland had two aces and five assists. Emma Harper had five kills and one block. Zoya Yielding has two blocks, five assists and 11 digs.
Alex Hallmark, Kaley Webb and Madi Browning all had 10 digs a piece.