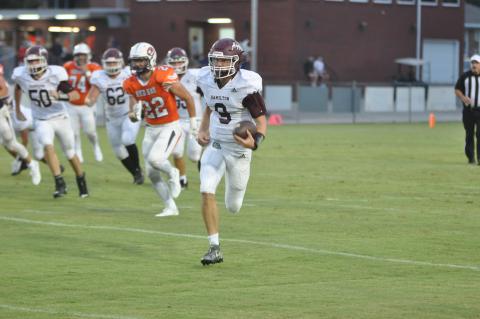 New seasons lead to new records, players and coaches. However, there is one thing that stays the same under the Friday night lights: The expectation to win.
All eyes were on the Hamilton Aggies as they made the trip to face off against the Red Bay Tigers on Friday Aug. 20.
An electrifying offense led the charge for the Aggies, and it resulted in a 40-24 victory for Hamilton.
Hamilton received the opening kick at their own 47 to start the game. There was no shortage of firepower for the Aggies, as they marched downfield with little resistance from the Tigers.
Aggie Quarterback Matthew Coleman and receiver Bryant Loving connected early and often, resulting in quick 17- and 25-yard receptions to land the Aggies on the Red Bay 5.
On third and goal, Coleman let the ball fly. The ball floated through the air and over the defense to find a cutting Loving, who performed a toe-tapping grab in the end zone for the Aggies. Following the PAT, the Aggies found themselves up 7-0 over the Tigers with 7:21 left in the first quarter.

Penalties killed Red Bay’s initial drive, where they turned possession back over to the Aggies. The Aggies took no time to score again, as Matthew Coleman took an option rush on the second play of the drive 55-yards for another Hamilton touchdown. Suddenly, Red Bay found themselves in a 14-0 hole with 2:30 left in the first stanza.
Red Bay’s drive was looking dangerous up until a fumble stopped it in its tracks. However, the very next play saw a scoop-and-score for the Tigers. With only two minutes into the second quarter, a successful two point conversion saw Red Bay chop into the Aggie lead to 14-8.
Both teams led empty drives until the Aggies prepared to take the field before halftime. After a multiple plays Matthew Coleman finished the job on second and goal, where he widened the Aggie lead to 21-8 with 1:32 left before halftime.
Before the half closed, Red Bay’s Kolby Bragwell passed to Nathan Elrod for a touchdown with 39 seconds left in the half. With another two point conversion, the Tigers shrunk Hamilton’s lead to 21-16.
After the second half  kickoff Matthew Coleman took matters into his own hands, finding a seam in the defense and slashing into the end zone, but a penalty reversed the touchdown. Matthew Coleman exploited the same gap in the defense the next play for a touchdown. A blocked PAT with 3:38 left in the third stanza saw the Aggies still ahead 27-16.
The ensuing kick return saw all the potential for a Tiger touchdown, but it was killed as the ball was stripped away and recovered by Hamilton’s Demichael Pickett on the Red Bay 48.
On third and seven, Matthew Coleman found his brother Brett Coleman on a 23-yard connection for the touchdown. After the PAT, the Aggies extended their lead to 34-16 with 1:04 left in the third quarter.
Another failed Tiger drive led to another Aggie chance to score.
On the second play of the drive, it was Dawson Taylor taking it in 15-yards for the score to put the Aggies up 40-16 with 10:14 left in the fourth quarter.
The next drive was different for Red Bay, as they marched at will against the Aggie defense, and Elrod pounded into the end zone in a 29-yard touchdown effort. With a successful two point conversion, the score saw Hamilton leading 40-24 with 4:05 left in the game.
From here, the teams wouldn't until the clock struck zero.
The Aggies will look to start a streak next week as they will defend their home field against the Sulligent Blue Devils for Hamilton’s Senior Night.

As for the Tigers, they will have a chance to redeem themselves as they will make the trip to Lexington to clash against the Golden Bears.