WINFIELD — The Winfield City Council voted to accept the proposed 2021-2022 budget during its meeting on Sept. 7, 2021. The new budget will allow the city to pay off several debts faster, pay for more paving projects and still stick some money back in savings.
“This is the eighth year I’ve prepared a budget,” said Mike Watkins, the city administrator, who created the budget and presented it to the council. “I’ve been waiting on a budget like this.”

WINFIELD - The Winfield City Council approved a motion to sell the old downtown Sewell building during its meeting on Tuesday, June 22. The building, located just across State Highway 253 from city hall, is owned by the city but is not currently being used. The building was previously owned by Northwest Medical Center and was donated to the city several years ago. According to city clerk Angie Oliver, the building has several issues due to the age of the building, and the council has been undecided on how to handle the issue until now.

WINFIELD - Northwest Medical Center-Winfield CEO Michael Windham offered a detailed look at goings-on at the hospital during a regular meeting held on Tuesday, April 6, at Winfield City Hall. Windham stated that when he arrived to the hospital last year, the biggest hurdle was the financial situation, which saw the hospital over one million dollars in the red. “I didn’t get to see the financials until I walked through the door. I looked at them and said, ‘This is not right, there’s something not correct here,’” said Windham.

WINFIELD -  Winfield Mayor Randy Price has called for the City of Winfield to use common sense when dealing with employees who have been exposed to COVID.
The city council discussed employee exposure issues during a regular meeting on Tuesday, Dec. 1, at the Winfield Community Shelter. 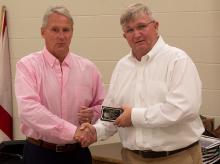 Winfield Mayor Randy Price (left) presents outgoing Winfield City Councilman Chris Ballard a plaque and a Winfield Key to the City during the council’s meeting on Tuesday, Oct. 20, which was the last meeting for the current version of the council.

WINFIELD -  Winfield Mayor Randy Price honored Winfield City Council members Chris Ballard and Anthony Hallmark with plaques and keys to the city during a regular meeting on Tuesday, Oct. 20, at the Winfield Community Shelter.
Councilman Jimmy Hayes was also awarded a plaque and key to the city, but was not in attendance during the meeting.
“I appreciate getting to serve with y’all for the past four years. I’ve enjoyed it and I think we’ve made a lot of good progress for the city and it’s been very a positive administration with y’all on it,” said Price. 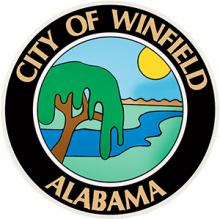 WINFIELD -  Winfield Mayor Randy Price expressed his concern about individuals pan-handling in downtown Winfield during a regular meeting on Tuesday, May 5, on the telecommunication app Zoom.
Price stated that he observed a family, who was traveling across the country, holding a sign and asking for financial assistance at the intersection in front of city hall and the Winfield Pastime Theatre.