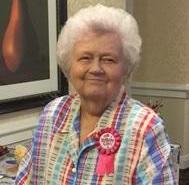 Robbie N. Tice, originally from Hamilton passed away on Sept. 12, 2022, at the age of 87.
She passed away peacefully, surrounded by family in Murfreesboro, Tenn. She was born in Hamilton on June 24, 1935, to the late John Elgar Skinner and Hester Viola Skinner.
She was married to the late Fray E. Tice of Hamilton for over 60 years. Mr. and Mrs. Tice moved to Huntsville shortly after their marriage where they raised their two children. She worked many years for the Huntsville City Board of Education before retiring in 1998. She eventually moved and lived in Murfreesboro, Tenn.
Mrs. Tice will be remembered and cherished for her love, loyalty, devotion as a wife, a great mother and a wonderful grandmother and a great person to her children, grandchildren, great-grandchildren, nieces, nephews, cousins, and her close friends. She is loved by all and will be missed dearly.
She is survived by her son - Greg F. (Teresa) Tice of Murfreesboro, Tenn; daughter - Vicki Tice (Thomas) Freeman of Prattville; eight grandchildren; 11 great-grandchildren; sisters - Jean Baily and Patsy Palmer both of Hamilton; and brother Ricky (Grace) Skinner of Hamilton.
Mrs. Tice is preceded in death by her husband - Fray E. Tice; parents - John Elgar and Hester Viola Skinner of Hamilton; sister - Jewel Cochran of Hamilton; and brother - John L. Skinner of Hamilton.
A celebration of life for Mrs. Tice was held on Saturday, Sept. 17, 2022, at the New Hope Baptist Church in Hamilton with burial following at the New Hope Church Cemetery.
In lieu of flowers, the family requests a donation in her memory to her favorite charity, St. Jude’s Children Hospital.
Marion County Funeral Home
3325 Bexar Avenue East
Hamilton, Ala.  35570
205-921-5777