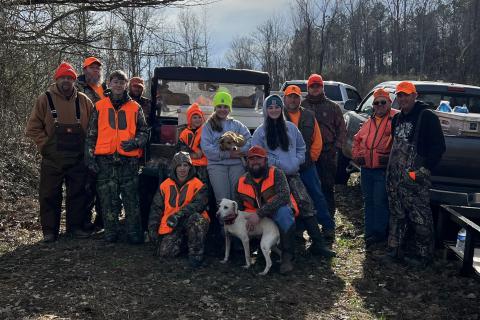 By Louis Mellini
Staff writer
HAMILTON - Pine Hills and Oak Hollars Child Classic Wish Hunt took place for its 11th year at Maywood Christian Camp in Hamilton on Jan 6-8.
Hamilton natives Kaleb Cayson, 14, and his brother Chandler Cayson, 8, were joined by Guntersville native Taylor Click, 11, for a weekend of hunting and fellowship organized by Jeff Carter and several local volunteers and sponsors who host the event every year in Hamilton.
The wish hunt is offered annually to children who have illness and to those living in the local community as well.
Organizer Jeff Carter, who began the hunt 11 years ago, stated that he gives thanks only to God for how successful the hunt has been year after year, wanting none of the credit for himself.
"No matter what, I never want Jeff Carter receiving praise for any of it. I want to make sure that God gets the glory for all of this. It's one of the most important things for me each year," said Carter.
"The good Lord called me to do this 11 years ago, and at that point, I didn't look past year one. I didn't look to the future at all, and here we are on year 11. There are 27 smiles that we've had the opportunity to put on kid's faces."
The weekend hunt featured squirrel and deer hunts as well as food supplied by Marion County locals Kenneth and Barbara Cooper and restaurants such as Dinelli's Pizza, Heritage Chevron and Hamilton's Subway.
Before the hunt began, Carter and his volunteers gave the children gifts containing all the hunting equipment and clothing needed for the weekend.
The boys then went out the next morning and began shooting shotguns and rifles in order to build up their confidence for the coming hunt.
"A lot of these kids have never shot before in their lives, so this is their first time shooting," said Carter.
"One of the big things with hunting is helping a kid to believe in themselves. If he believes he can do it, then he's going to be confident enough to take down a deer."
Carter stated that the freezing temperatures made for difficult hunting on Friday morning's squirrel hunt.
"It was really, really cold Friday morning," Carter said. "We didn't kill but one squirrel on Friday. The squirrels didn't want to be out and about because it was so cold."
That evening, the group went on the deer hunt, where both Cayson boys were able to kill deer.
Carter stated that Click, who had been on the wish hunt previously, failed to kill a deer throughout the weekend, as well as last year, but persevered until the very last day on Saturday when he killed a ten-point buck.
Kaleb killed an eight-point, while his brother Chandler killed a spike and a doe on the weekend.
The big deer hunt on Friday night ended as it does every year with a massive dinner hosted by the Coopers with over 70 guests, featuring all sponsors and volunteers at Maywood.
"It's a chance for the people who sponsor us to be able to meet the kids and, at the same time, it allows the kids to meet the people in the community involved," said Carter.
"If they just saw the few of us that are hands on during the hunt on the weekend, they wouldn't realize how many people were involved in this."
Carter stated that the weekend was incredibly successful for the children and the volunteers.
"This is the first time that we've had the opportunity to mount three bucks for three kids," said Carter. "It's pretty exciting for us."
Carter stated that the last two years have been a struggle because of COVID-19 restrictions and inviting children who are considered immunocompromised.
Carter stated that because of these restrictions, they have had the opportunity to reach to families in the local community and offer the hunt to their children.
"I feel blessed to be able to do that. God has placed an awesome group of men to help us during the weekend. He's blessed us financially and blessed us with more opportunities than we know what to do with. He's never let us do without."
Although Carter stated he is not someone who looks too far ahead in the future, he is starting to make plans for the coming years to invite not just three, but four children to come on the hunt.