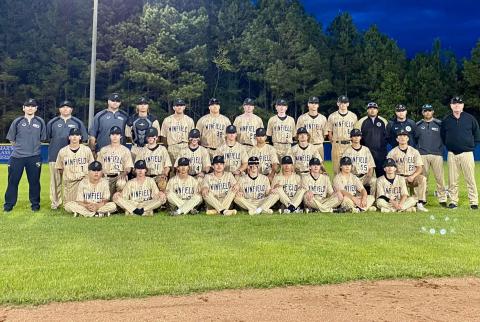 By Luke Brantley
Staff writer
OAKMAN — The Winfield Pirates defeated the Oakman Wildcats 12-5 on their own turf on Thursday, April 7 to win the 3A Area 10 championship.
It was the Pirates’ second victory over the Wildcats after beating them at home 16-6 the previous Tuesday, April 5.
In their first game, Brady May was the Pirates’ top scorer with three runs and one RBI, hitting two out of three. Layne Pollard scored two runs off of two hits.
Hunter Busha scored one run off of three hits and recorded three RBIs. Brooks Smith scored one run and brought in six runners.
Walt Hennicke, Aiden Quinn, Davis Bowen and Hayden Ballard each scored two runs. Tyler Mays scored one run.
In their second game against Oakman, Winfield’s May, Nolan and Mays tied for the most points scored with two points each.
Pollard, Brooks Smith, Hayden Ballard, Davis Bowen, Hennicke and Beasley each scored one run. Pollard, Smith and Nolan also added two RBIs each. Bowen hit one RBI.
Aiden Quinn hit the most RBIs for the Pirates with three total. Smith hit two doubles for four total bases gained.
May went on a spree and stole three bases. Accomplices Quinn and Nolan stole two each, while Beasley, Hennicke, Mays and Pollard got away with one each.
After winning the area championship, the Pirates began approaching the end of the regular season. They played their last regular season home game on Tuesday, April 12 against the Haleyville Lions.
After a close game, the Pirates lost 4-3.
Pollard, Busha and Smith each scored one run. Smith and Nolan helped bring them back to the plate with one RBI each.
Smith hit a triple and gained a total of five bases during the game. He also hit three-for-four. May gained two bases, and Bowen, Nolan, Pollard and Quinn each gained one.
The Pirates played their next games on the road against Sulligent on April 18 and Sumiton Christian on April 19. They play their next game at Elkmont on Friday, April 22 at 7 p.m.