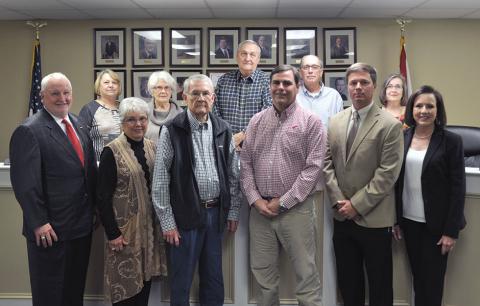 GUIN - A Marion County High School (MCHS) alumnus’ estate has made a donation of $1.7 million for scholarships to Guin students.
Birmingham attorney  Robert Cornelius appeared at the Marion County Board of Education’s monthly meeting on Thursday, Nov. 21, to announce the donation made by the estate of Wayne and Joyce Pyron.
Wayne Pyron attended MCHS where he played football and developed his love for the game and Alabama football.
He joined the Navy in January 1941 at the age of 17 as an Aviation Machinist’s Mate Second Class. He was a gunner aboard the U.S.S. Curtiss when it came under attack by the Japanese and was part of the occupying fleet after the surrender of Japan.
Serving until May 15, 1946, he won commendations from the commander Fleet Air Wing One, Victory Ribbons and Star for his service in the Asiatic-Pacific American Theatre. After returning home, he attended East Mississippi Community College in Scooba, Miss.
He was an officer for the Birmingham Police Department and later moved to Florida where he developed two retirement villages–Twin City and Storm Cove on Tampa Bay.
Wayne Pyron died on April 15, 2015, and is buried in the Guin City Cemetery. His late wife, Joyce, died on Feb. 16, 2018.
“This is truly an honor for me,” Cornelius said, noting that the donation has been roughly a five-year process.
Cornelius said that when Wayne Pyron passed away, there was no will on record for his office to work with.
The attorney noted that Wayne’s estate was transferred to his wife, Joyce. Subsequently, Joyce’s brother died without a will, and his estate was transferred to her as well.
“It just kept rising,” Cornelius said.
The attorney said his office was able to find a copy of Wayne Pyron’s last existing will and testament filed at an attorney’s office in Tampa, Fla., with five additions that made the will complex.
“When it came down to the end,” Cornelius explained, “the first $5 million (in Wayne Pyron’s estate) was to go to Marion County High School’s scholarship fund. We were just blown away. We checked it, double-checked it and researched it to make sure we were reading that right.”
Cornelius said after paying for all the legal fees, court costs and care provided to his surviving wife, the Pyron family estate is making a $1.7 million donation.
The money, the attorney noted, is specified in the will to “needy children.”
“There was no guidance,” Cornelius said. “It’s really wide open.”
Cornelius said, for this reason, a 501(C)(3) was registered under the name “Oakley Wayne and Joyce B. Pyron Scholarship Fund” to administer the monies.
Cornelius said he has handled several estate donations. However, this is the largest. He said he previously managed a $1 million donation by professional basketball player Charles Barkley to Leeds High School. He said a non-profit was established to manage those funds as well.
The attorney said that a committee will be appointed to manage the funds and to decide how the scholarships will be distributed.
Marion County Superintendent of Education Ann West said the committee will be appointed by the Pyron family to assure the monies are used for their intended purpose.
Cornelius said the scholarship fund is an established entity whereby estate and charitable donations can be made.
“The way we’re doing this will really set this up to help other individuals leave assets to the scholarship fund to help it grow,” Cornelius said.
Blaine Pyron of Guin spoke on behalf of the Pyron family, noting his uncle, Wayne Pyron, loved the City of Guin.
“He (Wayne) left Guin in 1941 to join the Navy. He didn’t live here after that, but the community and Guin made enough of an impression on him that throughout his life, anytime you spoke to him or his wife (Joyce), they always talked about Guin and how much they loved it,” Blaine Pyron said.
“They’d also talk about how much they wanted to help Guin, and in his older years, he couldn’t really decide how he wanted to do it and kept flipping back and forth about what he wanted to do, but it sounds like that in the end, things worked out. I’m glad that it came to this. He wanted to do something to help the community and help the community in the future. I think this will do that.”
MCHS Principal Dustin Silas spoke briefly later in the board of education meeting, explaining that he has been speechless since he was told about the donation.
“I don’t know what to say,” Silas explained. “I’ll help them (the Pyron family) do whatever they want to do for our students.”
West said she found out about the donation when she received a phone call last year from Cornelius.
“My first thought (when Cornelius called) was, ‘Oh, no,’” West said with a  laugh. “But he said, ‘I have some great news!’ And I thought, ‘Wow, that’s unexpected.’”
West said the attorney told her about the Pyron estate’s donation and told her she could not tell anyone about it.
“It was a hard secret to sit on because you just think about the lives the children MCHS and the opportunities that this amount of money is going to bring to these students. It’s wonderful,” West said.