Frozen water could be seen in many places on Dec. 23. Temperatures reached single digits.

By Louis Mellini
Staff writer
HAMILTON — Marion County got quite the cold Christmas period this past week, and while major damage was avoided for most, some major issues were caused by the cold when it came to water.
Hamilton Water and Sewer Department Manager Rodney Williams stated several residents and business owners suffered from burst pipes, leading to floods and the lack of available water for many, especially on the west end of Hamilton. 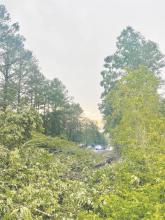 Storms in Marion County cause scattered tree damage, leaving many throughout the county temporarily without power.

By Louis Mellini
Staff writer
MARION COUNTY — Severe thunderstorms have been looming over Marion County this summer, and this past Friday featured one that caused some power outages and tree damage in the county.
Marion County Emergency Management Agency Director Eric Terrell stated that the county experienced power outages scattered through all the areas in Marion County.
Trees were falling onto roads during the storm, most notably on State Highway 19 in Hamilton.