To the right is the Class 1A Area 12 All-Tournament boys team.
From left are Braylen Roberts from Meek High School, Jameson Webb from Marion County High School, Ory Frith from MHS, Landon Morrow from MCHS, Jarrett Benson from MHS, Zach Lamoureux from MCHS and Ephram Milne from MHS.

By Louis Mellini
Staff writer
Hamilton — The Hamilton Aggies boys and girls varsity soccer teams took on the West Morgan Rebels on Friday, Feb. 18, at Hamilton High School.
The Aggies found it difficult to keep their defensive shape as the girls lost their match 0-10 and the boys lost 1-10.
Jack Wood was the sole goal scorer for the Aggies boys team.
Despite losing by a large margin in both matches, boys and girls coach Victoria Pendley had a positive outlook going forward in inproving the teams’ play.

Winfield’s Thackory Box eyes a pass while a Clements player does the same. The Pirates’ victory advanced them to the final round.

By Luke Brantley
Staff writer
HANCEVILLE — Severe weather wasn’t enough to stop the Pirates’ winning streak on Thursday night, Feb. 17, at Wallace State Community College in Hanceville.
The Pirates faced off against the Clements Colts in the 3A Northwest Regional semi-finals.
The Colts took the lead in the first quarter, leading the Pirates by five points, 17-12. But the Pirates turned up the heat in the second quarter, scoring 21 points while holding the Colts to eight.
At the half, the Pirates were leading 33-25. 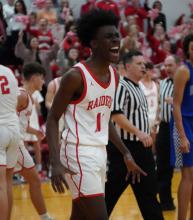 \Dalys Floyd (#11) gets fired up towards the end of the Red Raiders’ game against Brilliant.

By Luke Brantley
Staff writer
Winfield wins area
The Winfield Pirates advanced to the final round after a narrow 61-57 victory over Tarrant. Oakman made the finals with a 58-49 win against Carbon Hill.
The Pirates claimed the 3A Area 10 championship in a narrow three-point, come-from-behind victory over the Oakman Wildcats, winning 57-54 on Friday, Feb. 11.
The game was close through the first half. Oakman took the lead in the first quarter, which ended with the Wildcats leading 16-10. 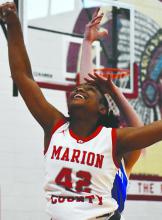 Marion County’s Trinity Metcalfe (#42) smiles as she jumps for the rebound, contested by a Brilliant Lady Tiger.

By Luke Brantley
Staff writer
WINFIELD — The Winfield Pirates took on the Sulligent Blue Devils at home on Friday, Feb. 4. The Pirates blew the Blue Devils away 94-55.
Winfield leaped ahead 22-11 in the first quarter and kept up the pressure in the second quarter. The score was 48-28 at halftime, putting the Pirates in a comfortable lead.
The Blue Devils came out of the locker room and scored 14 points in the third quarter, but 15 from the Pirates kept them solidly in the lead.

By Luke Brantley
Staff writer
WINFIELD — The Winfield Pirates beat the Tarrant Wildcats 61-57  on Tuesday, Feb. 8 to advance to the final round of the 3A Area 10 tournament.
The game was close, with the Pirates leading 32-28 going into halftime.
The Wildcats came out of the locker room swinging, and put up 21 points to the Pirates’ 11.
The Wildcats were now leading 49-43 going into the fourth quarter. The Pirates turned the tide, scoring 18 points while holding the Wildcats to eight. The game ended with Winfield leading 61-57.

By Peter J. Gossett
General Manager/Editor
HACKLEBURG — The Lynn Bears visited the Hackleburg Panthers Thursday, Feb. 3, and came away with a score of 66-58, while the Lady Panthers were able to keep ahead with the win 63-53.
It seemed a close game between the girls, as the Lady Panthers outscored the Lady Bears during the second and fourth quarters of the game. For the boys’ teams, Hackleburg was only able to outscore Lynn during the second quarter.

Winfield’s Tinsley Franks (#24) has her shot broken up by Hamilton’s Aubrey Sorrells (#11) and another Aggie defender.

WINFIELD — After falling to the Winfield Pirates in the Marion County Tournament, the Hamilton Aggies took revenge on Tuesday, Feb. 1 in Winfield, defeating the Pirates 69-55.
The Aggies took a 12-point lead in the first quarter and kept up the pace through the first half. They scored 24 points in the first quarter and 21 in the second.
At halftime, the Aggies were leading 45-21.
Both teams scored 11 points in the third quarter as the Aggies slowed and the Pirates built up some steam.

Phoenix Sandlin runs hard as he wins the boys’ 60 meter dash during the 1A-3A state championship meet on Friday, Feb. 4 at the Birmingham Crossplex.

By Peter J. Gossett
General Manager/Editor
BRILLIANT — Those outstanding athletes who have worked hard at perfecting and honing their skills this school year were added to the pages of history recently. These athletes from the football, volleyball and basketball seasons were named to the all county list by the Marion County Coaches and Principals Association during the Marion County Basketball Tournament at Brilliant Friday, Jan. 21.

By Luke Brantley
Staff writer
The Winfield Pirates boys and girls teams saw differing outcomes this week as the boys continued on their winning streak and the girls met a series of losses.
On Saturday, Oct. 22, the boys traveled to New Albany, Miss., and won 73-49. The first quarter was close, ending with both teams tied at 13-13, but the Pirates picked up speed and kept it up while the New Albany Bulldogs just couldn’t keep up. 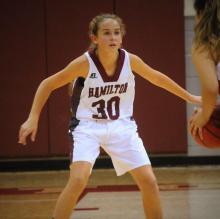 By Louis Mellini
Staff writer
MARION COUNTY — Hamilton Lady Aggie Mia Hollingsworth, Winfield Pirate Logan Feltman and Winfield Pirate Ja’borri McGhee have been featured in the Alabama High School Athletics Association’ Prep Basketball Spotlight for this year.
Hollingsworth impressed the AHSAA with her outstanding performance against the Haleyville Lions where she scored 25, assisted eight and recorded four steals in the game. She also received recognition for  scoring six three-pointers and closing with 28 points as the Aggies beat Marion County 64-52.

Winfield took on Carbon Hill on Jan. 14, and came away with one win. The Lady Pirates lost to Carbon Hill 26-41, but the Winfield boys bounced back to beat Carbon Hill 55-40.

By Louis Mellini
Staff writer
Winfield vs. MCHS
The Winfield Pirates won convincingly against the Marion County Red Raiders in their opening game in the Marion County Tournament in Brilliant Tuesday, Jan. 18.
Winfield was able to win 71-44, with Logan Feltman, Will Beasley and Ja’borri McGhee leading the scoring for the Pirates.
Feltman scored 22, going 50 percent from the field, while Beasley scored 18 and McGhee scored 14.
Beasley was impressive from range, scoring six three pointers in the game out of his 14 three-point attempts. 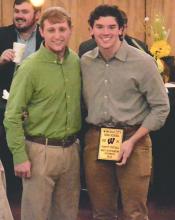 BRILLIANT — The Winfield City High School football team held its annual banquet on Sunday, Jan. 9, to celebrate the 2021 season. The banquet was held at the Barn on Coleman Farms in Brilliant.

The Pirates advanced to the third round of playoffs, the farthest any Winfield team has ever gone.

Several players received awards for their achievements during the season. 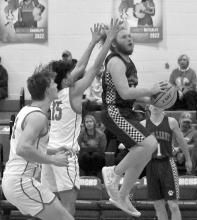 Winfield’s Brook Boman (#4) takes a shot during the first half of last Thursday’s game against Oakman. Boman scored a total of 8 points during the game.

The girls started off strong in the first quarter with 24 points to Oakman’s 2. The Lady Pirates held steady through the rest of the game, only allowing 10 points in the second quarter, 2 in the third quarter and none in the fourth.

By Luke Brantley Staff Writer BRILLIANT — The Brilliant Tigers lost 33-0 at home to the visiting Hubbertville Lions on Friday night, Oct. 8. The Brilliant defense started strong after the Lions received the opening kick off. The Lions gained six yards on a run their first play, but two sacks on second and third down sent them back. The Lions went for it on fourth down, but couldn’t get the first down. The Tigers took over on their own 25, but an incomplete pass and a fumble in the back stopped any progress down the field. The Tigers punted on fourth down.

In last week’s predictions, I went 4-2. I failed to foresee a loss by Hamilton and Brilliant. Let’s see if I can improve this week.