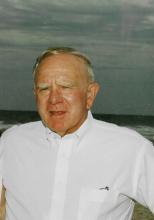 Mr. Richard Earl Moore, 91, of Winfield, passed away on Thursday, Jan. 19, 2023.
Mr. Moore was born in Winfield on Jan. 8, 1932, to Vandiver Clarence and Margaret Ellen Weeks Moore.
Mr. Moore was a member of the Winfield Freewill Baptist Church and a graduate of Winfield City High School where he played football in the early 1950’s.
He was enlisted in the United States Army during the Korean War, he was a member of the Winfield Masonic Lodge #304 and served on the Winfield City Council. He spent much of his life employed with 3M Company where he worked for more than 35 years. After his retirement, he continued working as a cattle and catfish farmer for many years. Hel spent his last years in the Country Place Assisted Living Facility in Hamilton, attended by his caregivers, Brittany, Juanita, Pat, Jody, Ashton, Madelyn and the wonderful staff there.
Mr. Moore was survived by his daughter - Deborah Moore (Ed) Lester of Tampa Fla.; granddaughter - Whitney Lester (Dennis) Combs; great-grandchildren - Grayson Clowney, Caitlin Combs, Taylor Combs and Emery Combs.
Mr. Moore was preceded in death by his first wife - Lorene Pollard Moore; his second wife - Betty Marshall Moore; his parents; brothers - Bob Moore and Van Moore Jr.; and sister - Sarah Gray Segars.
The funeral service for Mr. Moore was held on Sunday, Jan. 22, 2023, at the Bowen Funeral Home Chapel with burial following at the Winfield City Cemetery.
In lieu of flowers, the family requests donations be made to Winfield Elementary School, 601 County Hwy 14, Winfield Ala. 35594, in the Moore family’s memory.
Bowen Funeral Home
981 State Highway 253
Winfield, Ala.  35594
205-487-4327