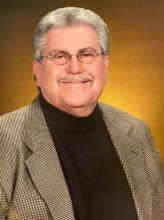 Odis Ray Harper, 83, of Hamilton, passed away on Friday, Aug. 26, 2022, at North Mississippi Medical Center, Tupelo, Miss. He passed away peacefully surrounded by family and friends.
After Mr. Harper served in his tour of duty in the Marines, he joined his father in the insurance business at the time becoming the youngest licensed insurance agent in the state. He began his mobile home career in 1964 as sales manager and advanced to general manager in 1969. He acquired numerous awards due to his sales ability and ambition. His knowledge and experience in manufacturing and sales was God given and his sales led him into the radio industry-sales and ownership but his greatest pleasure was entertaining as "Big Odis" Friday Nights on Pigskin Roundup following Winfield football broadcast on Gold 97.7.
He was married to Maxine Harper and his pride and joy was his son, Heath and his family, Kayla, Kennedy and Kingston.
He is preceded in death by his parents - Odis and Helen Harper; son - Steven; and numerous aunts, uncles, cousins and grandparents.
A celebration of life for Mr. Harper was held on Sept. 1, 2022, at the First Baptist Church in Hamilton.
Hamilton Funeral Home
161 Falcon Circle
Hamilton, Ala.  35570
205-921-3197