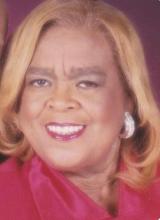 Mary Nell Hall Wallace, 82, of Los Angeles, Calif., formerly of Guin, passed away peacefully on Saturday, Aug. 27, 2022.
She was born on Feb. 17, 1940, in Guin to Jessie Orlando Hall and Odie Lee (Terrell) Hall and was the youngest of 11 children. She matriculated through the Guin school system and graduated from the Guin Color School in 1958.  She accompanied her mother, father, and grandfather to church throughout the Alabama area where her grandfather was running gospel meetings and church planting throughout the area. She loved the Lord and was baptized into Christ at an early age at the and stayed a faithful Christian until death. She was a hard fighting solider for the Lord as she was involved in the Church of Christ National Campaign – Crusade for Christ, the Beach Ministry, Sick and Shut-In Ministry, Prison Ministries Ladies Ministry, and the Widow’s Club at Compton Avenue Church of Christ. She would not let anything turn her around from dawning her entry to church on Sunday Mornings. She faithfully served until the COVID-19 pandemic and her health would not allow her to worship in person.
After graduating from high school, Mrs. Wallace wanted to broaden her world and moved north to Chicago with her sister Catherine. While living with her sister, she met a tall slinger young man named Williford Alexander Wallace while visiting his sister’s boyfriend Wilson her nephew. At that chance meeting, she met the love of her life, Willford and Mary, married shortly after on Sept. 23, 1960, and were married 50 years and 8 months, until God called Willford home to glory. From this union were born Veronica G. (Wallace) Kelly and Laronda K. (Wallace) Echols.
In June of 1962, Willford sent for Mary and baby Veronica to come to Los Angeles, Calif., to build their lives in the land of opportunity. She was a domestic engineer for her family for 50 years. She worked outside of the home as a caregiver at St. Timothy Towers Senior Living in Compton, Calif., assisting an elderly couple and widow with daily activities and shopping. She had an excellent eye for fashion and her love to dress to the nines spun into a career in sales at her favorite store (Hudson and Sally’s) in Inglewood, Calif. She was a natural salesperson greeting customers with her friendly demeanor, bright smile, and encouraging words. She worked for five years until she was given a promotion to one of her most coveted roles of her life as a grandmother, that began at age 60. The things that Mrs. Wallace loved the most were the Lord, family, cooking large soul food dinners, traveling with her husband, being fashionable in her dress, playing Bid Wiz, loving and caring for her girls, being a granny, and supporting her daughters and grandsons in their sporting events and endeavors. You could catch her in most any sports season on Saturday up early dressed in her sports attire ready to cheer them on. No matter where she was you would hear her proudly talking about her adventures with them and their games. She earned the nickname Grandma BLING because she always wore a glitter ball cap, t-shirt, shoes, or jacket adorned with her grandson’s jersey numbers and their name on it. Extreme heat, cold, crowds, or sickness didn’t stop her from yelling from the stands from Inglewood, Calif., to the Los Angeles Coliseum. (Fight On!)
Mrs. Wallce leaves to cherish her memory her two daughters - Veronica (Rahnee) Kelly, Laronda Echols (Ronda)/(LC) of Los Angeles, Calif.; her grandsons - Hunter of Tucson, Ariz., Dorian, Jordan, and Dominique Echols of Los Angeles, Calif; sister-in-laws - Josephine Wallace of Beaverton, Joann Hall of Guin, and Parmela Wallace of Chicago, Ill; and close family friends - Rodney El Pheage, Eva Jewel Henry and Alvin Parmer; and a host of nephews and nieces, church family and friends.
She was preceded in death by her parents - Jessie and Odie (Terrell) Hall; her siblings - Ernest Hall, Eunice Humphrey, Moses Hall, Sr., Woodrow Hall, Leander Hall, Catherine Odell Mc Collumn, Choyce Hall, Loyce Hall, Ella Ruth Olds and Oliver (OJ) James; and son-in-law - Jerome B. Kelly.
A celebration of life service was held on Saturday, Sept. 17, 2022, from the Otts Funeral Home Chapel with burial to following at the Beaver Creek Cemetery.
Pastor Rodney El Pheage was the officiating minister.
Condolences and special memories may be shared with the family at: www.ottsfuneralhome.net.
Otts Funeral Home
4255 Highway 278 West
Sulligent, Ala.  35586
205-698-8668