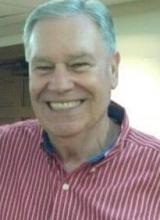 James L. Dodd, Jr. was born on Nov. 29, 1943, and crossed from this life into his eternal home with Jesus on Aug. 27, 2022.
He was a long-time member and deacon of Hamilton Church of Christ. He loved the Lord with all of his heart and everything he did was to glorify Him. He was the most kind-hearted, giving and honorable person you would ever have the good fortune to meet.
Mr. Dodd grew up in the town of Lynn in Winston County, where he met his bride of 60 years. They lived in Texas, Georgia and then Tuscumbia before settling in Hamilton.
He managed the local KFC for forty years, moving his family to Hamilton in October 1974 when he opened the restaurant. Known as the "Big Chick" around town, Mr. Dodd was generous with his time, energy, money and chicken, serving his community in countless ways, whether it was catering a church function, purchasing an ad for the football program, delivering Thanksgiving turkeys or Christmas baskets to those less fortunate, or taking the leftover chicken at closing time to the police department. He cared a great deal about all of his employees. Most were high-schoolers that he considered his kids. He gave a lot of talks about work ethic and always doing the right thing, no matter the consequences.
He retired in October 2014 and hated the idea of it, but once he got to spend more time with his precious great-grandkids, he warmed up to it and began to enjoy his newfound freedom. Many days you'd find him on the floor of the playroom in their home playing with Barbies and baby dolls or getting a full makeover, including makeup, hair and polished nails. He was up for anything with the little ones.
After his retirement, Mr. Dodd had some major health problems. In October 2015, he had to have emergency surgery to repair two brain bleeds. He recovered from that only to be diagnosed with cancer in August 2017. He persevered through treatments for almost five years before treatments ceased to be effective. Although extremely sad at the thought of leaving his family, he took it in stride and stated he knew it would come to that at some point. He was ready to move into the next life, something he had spent his life preparing for and looking forward to. He was ready to see his precious Taylor, his parents, his siblings and so many friends who had gone before him.
He was much loved by his family, which includes his wife - Becky; daughter - Jamie (Cy) Christian; daughter - Jennifer (Brock) Taylor; granddaughter - Kelsi Carlton; granddaughter - MacKenzie (Curt) Vann; grandson - Alex Reid; great-grandchildren - Bryleigh and Thatcher Carlton, Lydeea Hulsey, Jaxton James, Bryant and Colby Vann; and a host of nieces, nephews and cousins.
He was preceded in death and welcomed into heaven by his great-grandson - Taylor Charlie James Carlton; his parents - Luther and Annie Bell Dodd; his siblings - J.M., Garnett, Lathen and Gene Dodd; a nephew - Ronald Dodd; his father-in-law and mother-in-law - Ben and Estelle Barton; and a host of relatives and friends.
He will be forever loved and missed.
The funeral service for Mr. Dodd was held on Friday, Sept. 2, 2022, from the Hamilton Church of Christ with burial following at the Lynn Cemetery.
Bro. Ted Burleson was the officiating minister.
In lieu of flowers, in memory of James Dodd, make donations to Maywood Christian Camp, 700 Maywood Camp Road Hamilton, Ala. 35570 or St Jude Children Research Hospital, 501 St. Jude Place Memphis, Tenn. 38105.
Marion County Funeral Home
3325 Bexar Avenue East
Hamilton, Ala.  35570
205-921-5777