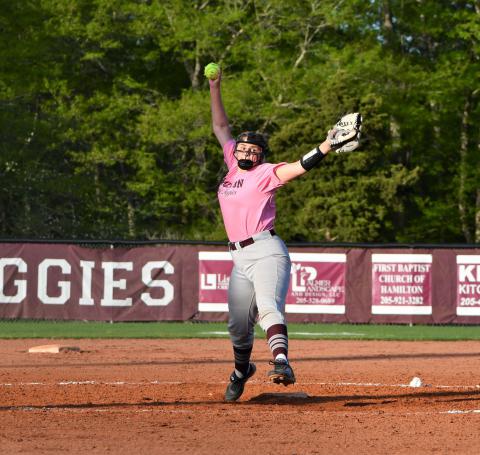 Lady Aggie Michaela Otts winds up in the game against Carbon Hill on April 19.

By Louis Mellini
Staff writer
Hamilton vs.
Marion County
The Hamilton Lady Aggies defeated the Marion County Lady Red Raiders in a game that lasted just five innings on Thursday, April 14 in Hamilton.
Hamilton won the game 11-0, keeping the Lady Red Raiders off of the scoreboard and keeping them to very few hits.
Hamilton scored just one run in the first two innings of the game, but in the bottom of the third inning, they began to let fly from the plate.
The Lady Aggies scored eight runs in the third and another two runs in the fifth inning, completing the game and shutting out Marion County in the process.
Hamilton’s Sorrells sisters, Hannah Hogue and Leah Lawler were among the standout performers in the game.
Paisley Sorrells got three hits, scored three runs and recorded two RBIs in four at bats, while Aubrey Sorrells got two hits and one run from her two at bats.
Hogue had two hits, two runs and two RBIs from her three at bats, while Lawler had two hits, two runs and one RBI from her three at bats.
Hamilton’s first base player Lexi Dobbins recorded three RBIs and two hits during her four at bats during the game.
Emily Jones was on the mound during the Lady Aggies’ win, pitching all five innings and giving up just four hits.

DAR Patriots vs. Hamilton
Hamilton Lady Aggie Micheala Otts threw a perfect game and the Lady Aggies won another game with a large scoreline against the Kate Duncan Smith Daughters of the American Revolution Patriots on Friday, April 15.
The Lady Aggies won the game 10-0, scoring plenty of runs in the final inning of the game that ended early due to the scoreline.
Hamilton opened their scoring in the bottom of the first, and were relatively steady in the following innings leading up to the bottom of the fifth.
Hamilton scored seven runs in the bottom of the fifth inning and were able to see the game out without letting up a single run against the Patriots.
Hamilton’s Paisley Sorrells recorded three hits in the game while scoring two runs in her four at bats.
Aubrey Sorrells had two hits and scored three runs in her four at bats.
Otts was on the mound for the full five innings for the Aggies, giving up no runs, no hits and striking out two batters.

Hamilton vs.
ACA Patriots
The Hamilton Lady Aggies suffered a narrow defeat against the American Christian Academy Patriots on Friday, April 15, in Hamilton.
The Lady Aggies gave up three runs right at the start of the game in the bottom of the first inning.
Both teams found it difficult to score for the rest of the game until the sixth and final inning.
Hamilton almost had the comeback complete as they scored three runs in the top of the sixth, but the Patriots were able to score in the bottom of the inning as they walked away with the win.
Hamilton’s Paisley and Aubrey Sorrells, Lexi Dobbins, Ella Kelley and Emily Jones all recorded one hit.
Kelley was on the mound for the entire game, letting up four hits, four runs and striking out two batters.

Hamilton vs.
Carbon Hill
The Hamilton Lady Aggies won a narrow victory against the Carbon Hill Bulldogs on Tuesday, April 19, in Carbon Hill.
Carbon Hill opened the scoring in the top of the first with one run, but the Aggies responded well with three runs of their own in the bottom of the inning.
Hamilton kept the Bulldogs off of the scoresheet in the second inning and scored two runs in the bottom of the second.
The Bulldogs were able to claw their way back into the game in the fourth and fifth inning, scoring a total of three runs and bringing themselves to within just one run of leveling things up.
Hamilton was able to see out the game and gave themselves a small two run cushion after scoring in the bottom of the sixth inning.
Hamilton’s Lexi Dobbins and Hope Smith had two hits and two RBIs in three at bats against Carbon hill.
Ella Kelley started on the mound for the Lady Aggies and pitched five innings, giving up six hits, four runs and striking out five batters.
Michaela Otts relieved Kelley in the final two innings, allowing two hits and striking out two batters.