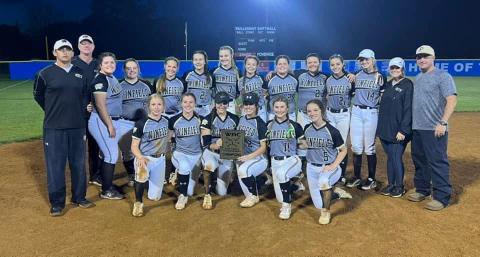 By Luke Brantley
Staff writer
SULLIGENT — The Winfield Pirates’ softball team won the West Alabama Conference tournament on Saturday, April 16 with two wins against the Sulligent Blue Devils.
The Pirates started off their run in the tournament with a 8-4 victory over Lamar County on Friday night. The Pirates scored one point in the top of the second inning and three more in the top of the third, but the Bulldogs caught up and tied the game in the bottom of the third.
The Pirates scored four more points in the top of the fourth inning, and shut Lamar County out for the rest of the game.
Winfield was down 2-0 at the end of the first inning but went up 4-2 after the first inning. The Pirates scored three more unanswered points in the second and third innings.
The Blue Devils rallied briefly in the fourth inning and scored four points, but the Pirates scored three more to keep the lead. Both teams scored one point each in the sixth inning, and the Pirates won 11-7.
On Saturday, Winfield faced off against Sulligent for the first of two games.
The Pirates won the first game 11-7. Winfield started strong and held firm, consistently scoring when they took the plate and holding the line from the mound to stay ahead.
Winfield’s Willa Simmons scored two runs and one RBI, and hit 3-4. Brantley Cagle, Hannah Kimbrell, Karrah Parr and Madelyn Grace Lewis each scored one run.
Several Pirates hit RBIs. Parr hit the most, totalling five. Cagle was next with three. Simmons, Kimbrell and Parr hit one each.
Simmons hit two doubles and Cagle hit one. Cagle and Parr each hit a home run. Cagle gained a total of seven bases during the game, while Simmons gained five, Parr gained four, Lacy and Kimbrell gained two each and Parr and Lewis each gained one.
On the mound, Lacy pitched for five innings, throwing five strikeouts and allowing six runs. Simmons pitched for two innings and threw three strikeouts and allowed one run.
In the final game, Winfield took on Sulligent a second time to end the tournament.
Once again, the Lady Pirates took the lead early, scoring twice in the first inning. Sulligent scored one point in the third inning and another in the fifth, but it wasn’t enough to match the next two points Winfield scored in the fourth inning and the three points they scored in the fifth.
Kimbrell, Lacy, Parr, Brooklyn Boman and Lewis each scored one run. Lewis, Simmons, Lacy and May helped with one RBI each. Parr hit two RBIs.
Lacy and Parr each hit a double. Parr gained a total of three bases. Lacy and Simmons each gained two.
The Pirates played their next game on Tuesday, April 19 against Lamar County. They play their next game at home against Marion County on Monday, April 25 at 5 p.m.