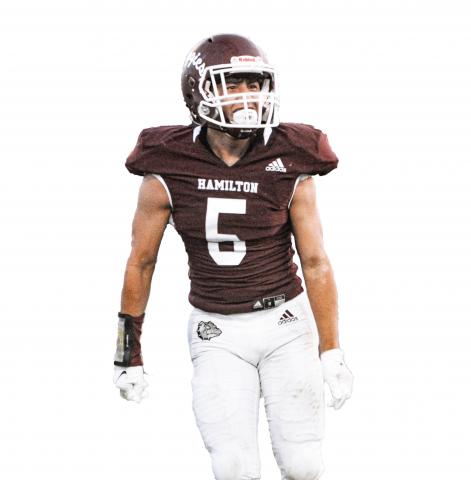 HAMILTON   -  Sargent Stadium is a landmark in Hamilton, and it was buzzing this past Friday for the Aggies’ first home game of the season.
The game was also Hamilton’s Senior Night, and there was no doubt that the 1-0 Hamilton Aggies looked to protect their home field against the visiting 1-0 Sulligent  Blue Devils.
At the end of four quarters, Hamilton asserted themselves as victors over Sulligent with a score of 37-22.
The opening coin toss saw Sulligent take possession, but nothing came out of their opening drive.
The Aggies jumped on the opportunity to take the lead as they marched downfield with little resistance.
The dominant opening drive was capped off by an option rush, where Bryant Loving dove into the endzone for the Hamilton touchdown.
Following the PAT, the Aggies found themselves up 7-0 with 4:04 left in the first stanza.
The Blue Devil drive started in disaster, as the first play resulted in a lost fumble.
The Aggies could not capitalize on the turnover, though, as they lost a fumble of their own at the Sulligent three-yard line.
The Blue Devils then ripped away at the Hamilton defense, creating 41-yard and 31-yard plays to set the Sulligent offense up at the Aggie six-yard line.
On second and goal, quarterback Dees Price took it upon himself to score, rushing past the goal line for a Blue Devil score.
With still 10:23 left in the second quarter and a good kick, Sulligent evened the game at the score of 7-7.
Hamilton’s next drive was unsuccessful as they turned possession back to the Blue Devils via punt to the Sulligent four.
However, the Aggies would regain possession in thrilling fashion.
On the second play of the Sulligent drive, a bobbled pitch would be fallen on by the Blue Devils in their own endzone for a safety, putting the Aggies up 9-7 with 4:12 left before halftime.
The Aggie drive slowed down after a first down, but nothing could prepare the Blue Devil secondary for what was about to happen.
On second and 14 from the Sulligent 28, Aggie quarterback Matthew Coleman trusted Adam Frost with a deep pass, in which Frost boasted his athleticism to leap and make the overhead grab in the endzone.
With this score, the Aggies went into halftime with a 16-7 lead over the Blue Devils.
The opening second-half Hamilton drive was unsuccessful, as the Blue Devils took over at the Aggie 31.
Sulligent’s offense came out of halftime rejuvenated, as on the second play of the drive it was Bryce Ownby taking it the distance with a powerful rush through the Aggie defense.
Following the kick, the Blue Devils chopped the lead to 16-14 with 9:47 left in the third quarter.
Hamilton had enough of a close game, as they willed themselves downfield to the Sulligent 14.
Thomas Angel took control on the next first down, rushing and spinning away from defenders before crossing the pylons for another Aggie score. With another good kick, the Aggies extended their lead to 23-14 with 6:18 left in the third quarter.
From here, both teams would not score until the fourth stanza.
The Aggies took their time in their offensive attack as they looked to protect their lead.
Following all rushing plays throughout the drive, Matthew Coleman plowed through the defense on third and goal, which widened the gap to 30-14 with 5:20 left in the game.
Sulligent would not quit, however, as on third and six it was Lawson Spruiel dashing 59-yards for a Blue Devil score.
A successful two-point conversion would shrink the lead to 30-22 with 4:10 left in the fourth.
Matthew Coleman was not finished with his work, as on third down from the Blue Devil 28, he made his own sprint to the end zone to make the score 37-22 with 2:33 left in the match. Nothing came out of the proceeding Sulligent drive, and the Aggies kneeled the game away to secure their new 2-0 record.
Friday, the Aggies will celebrate homecoming as they battle against the 0-2 Curry Yellow Jackets.
On the other hand, the now 1-1 Sulligent Blue Devils will look to bounce back at home against the 0-2 Cold Springs Eagles.
The Aggies will play their next game at home against Curry at Sargent Stadium in Hamilton on Friday, September 3.