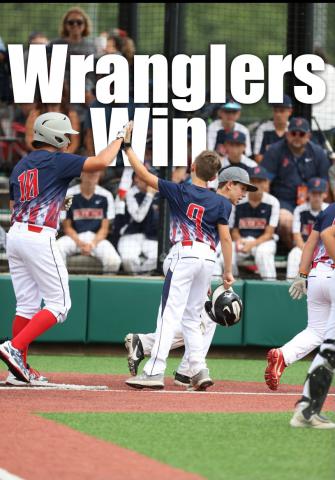 The Wranglers, a Marion County-based 12U travel baseball team made of players from Winfield, Hamilton, Hubbertville, Fayette, Vernon and Tupelo, won the Youth Baseball Nationals tournament which was played July 9-15 in Elizabethtown, Ky.
The Wranglers were up against the CBC Riverhawks Elite from St. Johns, Fla., in the championship game. Once again, the Wranglers were victorious, walking away with the trophy after winning 12-4.
The Wranglers ended their season with a record of 47-5. They classified as major by the Perfect Game Association, and they were the only team from Alabama to classify as elite in Grand Slam Sports Tournaments rankings.
The team is coached by Sonny Tibbs, Blake Gilstrap and Scotty Chandler. Players include:
Hamilton players Mason Holloway, son Harry and Amy Holloway, Houston Tibbs, son of Sonny and Regina Tibbs, Jackson Chandler, son of Scotty and Heather Chandler, and Coley Gilstrap, son of Blake and Alisha Gilstrap;
Ridge Brown, son of Austin and Teralee Brown of Vernon;
Brady Stocks, son of Brandon and Jocelyn Stocks of Fayette;
Winfield players Brandon Whitley, son of Wade and Jennifer Whitley,  and Blaine Bowen, son of Tommy and Rhonda Bowen;
Blaize Wakefield, son of Eric and Karla Edge of Hubbertville; and
Tupelo players Andrew Brown,  son of Jim and Candise Brown, Brady Nichols, son of Kim Nichols and Wallace Gilberry, and Colton Watkins, son of Chad and Jennifer Watkins.
The Wranglers played in 12 tournaments, winning 11 and only losing one. The Wranglers went into nationals as the only localized team out of 36 teams. All other teams were baseball academies.
In tournament play, the Wranglers:
• Won 19-1 against Longshots Baseball of Downers Grove, Ill.;
• Lost 11-7 to Phenom Baseball Academy -major of Chicago;
• Won 13-2 against Blaze Baseball Club of Oakley, Calif.;
• Won 11-7 against the West Boynton Cobras of Miami, Fla.; and
• Won 7-6 against Legacy Baseball Academy of Brighton, Mich.;
In the finals bracket:­
• Won 8-5 against Delmarva Aces South of Virginia beach, Va.;
• Won 4-0 against the Wolves Baseball Academy of Denham Springs, La.;
• Won 10-0 against Phenom Baseball Academy-major of Chicago; and
• Won 15-1 against West Florida Baseball Academy of Cantonment, Fla.;
The Wranglers won the Championship game 12-4 against the  CBC Riverhawks Elite of St Johns, Fla.
Bracket
breakdown
In the first round of bracket games, the Wranglers took down the Delmarva Aces South from Virginia Beach, Va., 8-5.
Wranglers’ coach Sonny Tibbs said Houston Tibbs got the win on the mound. Mason Holloway led the game off with a home run, and Brandon Whitley went 3-for-3 hitting. Brady Stocks was 2-for-2. In the second round, the Wranglers faced Wolves Baseball Academy and won 4-0.
Brady Stocks pitched a six-inning complete game for the win. Coley Gilstrap and Mason Holloway both went 2-for-3 batting and stole four bases total. Houston Tibbs was 1-for-3 with two RBIs.
In the third round, the Wranglers were up against Phenom Baseball Academy, a rematch of an earlier pool game that they lost. The Wranglers defeated them 10-0.
Ridge Brown pitched a complete game shutout, only allowing one hit and striking out six. Brown blasted an over 300-ft. home run in first inning to begin the scoring. Mason Holloway and Brown went 2-for-2, each with a walk. Houston Tibbs went 2-for-3, scoring two runs and driving in three RBIs. Andrew Brown went 3-for-3, scoring three times.
In the fourth round, the semifinals, the Wranglers took on West Florida Baseball Academy, winning the game 15-1.
Mason Holloway got the win, pitching four innings and striking out seven. Brandon Whitley went 3-for-3 with a walk and two RBIs. Brady Stocks went 1-for-3 with two RBIs. Houston Tibbs was 1-for-2 with two walks and two scores.

Championship game
During the championship game on July 14,  Brown started off on the mound, with Coley Gilstrap pitching the last inning to shut the Riverhawks down and end the game.
Brandon Whitley led team in hitting again by going 3-for-3 with a double and a home run. Brady Stocks went 3-for-4 with three RBIs. Coley Gilstrap went 2-for-3 with a double and a triple and Houston Tibbs went 2-for-4, scoring twice. Tibbs said the tournament win was a fairy tale ending to a great season and a great team.
“Going into this tournament as the only local team, our only goal was making it to the top 10,” Tibbs said. “We were not expecting to do as well as we did, nowhere by far.”
Tibbs said that the momentum seemed to shift in the Wrangler’s favor during a pool play game against Legacy Baseball Academy earlier in the tournament.
“We were getting beat 6-3, and then we had a 45-minute lightning delay,” Tibbs said.
“During the delay, their coach had them over in the dugout sitting there all calm and collected, while our kids were jumping around going crazy. When we came back out, their kids were flat and ours were pumped. We scored four runs in the bottom of the fifth inning and won the game. That was the game that flipped the switch. We didn’t even have a close game after that.”
Tibbs said that everything that could have gone right went right for them, and everything that could have gone wrong for other teams went wrong. He said that he was able to save his top pitchers for later in the tournament because everyone was hitting so well.
“It was one of those situations where we could go through there and play the same tournament 50 more times, we’re never going to go through there and do that again.
“This was the fifth year of us having this team together. Some of the kids come and go each year. But this is by far the best team that I’ve had. With this being our last year of youth ball before they start playing for school, it was unbelievable. It was just like a fairy tale movie ending.
“It was just unbelievable to see it and watch just how much these kids matured from where we started five years ago to where we are now and see how hard they work and how much they improved.”