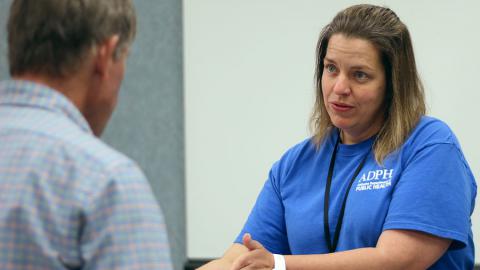 HAMILTON - Elizabeth Foster, Alabama Department of Public Health (ADPH) emergency preparedness coordinator, informed Marion County officials that testing for COVID-19 is now being limited to those who fall under a specific criteria.
This information was given during a meeting involving Emergency Management Agency Director Eric Terrell, several mayors, police officers and the Marion County Sheriff Kevin Williams on Tuesday, March 24, at the ADPH building in Hamilton.
“We will only test individuals who are symptomatic and have to be hospitalized, immunosuppressed or immunocompromised, meaning they have to have some sort of underlying condition, they have to be 65 years or over or in a long term healthcare facility such as a nursing home or an assisted living facility. They’ve really tightened down on testing criteria,” said Foster.
Foster stated that test results for the virus usually take up to 72 hours. However, due to the increasing number of tests being administered, results could take approximately five to six days.