Hamilton locks in with jail plan 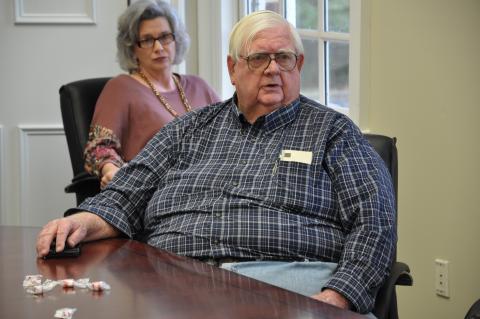 HAMILTON - A new Marion County Jail is beginning to become more of a reality.

The Hamilton City Council voted unanimously during its Monday, March 16, meeting to pledge $200,000 a year to the Marion County Commission to help cover payments for up to a $10 million bond for a new jail.

The pledge was passed with a provision that the commission not raise lock-up fees for the Hamilton Police Department.

During the same meeting, the council voted 4-1 to price a 5.14-acre lot in the Bedford Industrial Park at $10,000 an acre. The commission has asked the city to price the land as it is considering it for its new jail site.

The commission formally approached the city during a work session on Wednesday, March 11, to request its participation in the plan.

According to attorney Scott Hunt, who serves as the legal counsel for both Hamilton and the county commission, officials are hoping to build a jail for $8-$10 million.

The decision by the Hamilton council is the first formal monetary decision toward building a new Marion County Jail to date.

The current jail located on Winchester Drive was constructed in 1979 and has been having to handle overcrowding for numerous years.

A jail committee was formed in Fall 2019 to form a plan to address the situation.

The decision to join the commission’s plan came unexpectedly following a 30-minute executive session at the end of the March 16 council meeting. The council entered the session to discuss potential litigation.

Hamilton Mayor Bob Page told the Journal Record that during the executive session, the council discussed three items. He said the council’s decision to move forward with the plan involved one of those items.

Returning from the closed session, councilwoman Tami Lewis Williams made the motion that the city join the commission’s jail plan. Wade Sullins seconded the motion, and Page and councilors Gene Sanderson and Herb Winsett joined the motion to make the vote unanimous. Councilor Bobby Joe Irvin was absent.

Page, Williams, Sullins and Winsett all voted in favor of pricing the industrial park land at $10,000 an acre, which is the acreage rate the State of Alabama appraised the land at when it purchased property in the industrial park for its district Alabama Department of Transportation office.

The council’s confirmed price will be subject to approval by Hamilton’s Industrial Board. If the board rejects the priced, the council will revisit the matter.

The commission asked the city to price plot of land beside the Marion County Department of Human Resources (DHR) building in the industrial park. The commission has also asked for priority on an adjacent lot to potentially build a judicial building near the jail in the future.
Sanderson was the dissenting vote as he was supporting a motion to sell the land at a bargain price of $30,000.

Over the last two months, Sanderson has been vocal about giving the county a bargain on the land, even suggesting that the city donate it. However, the commission has said it is expecting to pay.

Page said during the March 16 meeting that he believes $10,000 an acre for an industrial site with road and utility access is a bargain.

Williams added that the commission didn’t offer to give Hamilton a discount or deal on the jail plan depending on how much they sell the land for.

Sanderson believes a bargain price would secure the county choosing Hamilton for its jail location, explaining they could choose to locate elsewhere.

Hunt said building the jail in Hamilton was a matter of convenience for the Marion County Sheriff’s Office and Marion County Courthouse.

On behalf of the commission, Hunt explained a few options to fund the new jail have been considered. However, it is currently considering using the county’s hospital tax.

The hospital tax originated in 1949 as a two-cent sales tax for the construction of a clinic in Guin, the Hamilton Nursing Home and the hospital in Hamilton, and that the funds would later be used for the operation of both once they were paid for. The Marion County Board of Education was given half of that sales tax in 1963.

“Once the county got out of the hospital business (in 1981), there was concern that this tax would go away for good,” Hunt explained.

In 1981, the tax was amended to give 50% of the sales tax dollars to Marion County municipalities, 42% to the county and 8% to the Marion County Health Department.

Hunt said the county is suggesting it put up its percentage of the hospital tax to pay for the new jail and would be looking to the municipalities to offer up their proceeds of the tax, too.

“Based upon the sales tax that we currently collect in our county, which is roughly $2.6 million from that one-cent tax, we could build a jail and not impose a new tax for the citizens,” Hunt said.

From the county’s perspective, Hunt says this is the most straightforward way to collect funds for the new jail. However, he understands that municipalities have come to rely on the funds in their yearly budgets.

Hunt said the City of Hamilton collects just nearly $500,000 from the tax annually. The commission would be asking for around $200,000 of that for 10 years.

“I think we’re in as much need of a jail as we were a hospital, at the time,” Nichols said.
Plan comes in the wake of tax fight

Ironically, this plan comes just a year-and-a-half after the Alabama Supreme Court confirmed that the commission had been wrongfully withholding portions of the hospital tax monies from municipalities.

In September 2018, the high court confirmed a December 2017 ruling by former 25th Judicial Circuit Court Judge John Bentley, who ruled in favor of five municipalities, who sued the county commission over the funds.

Winfield, Guin, Brilliant, Gu-Win and Twin sued the Marion County Commission in 2015 over the manner in which the commission began redistributing the hospital tax.

Payment rates to Marion County municipalities (50% of the hospital tax) continued unaffected from 1981 until May 2015. However, in June 2015, the county altered its disbursements, giving on 18% of the funds to the municipalities.

The commission argued that it had changed the distribution per a recommendation by state auditors to pay off bond debt.

On Dec. 18, 2017, Bentley, now retired from the bench, ruled that the Marion County Commission must pay $657,344 back to all Marion County cities and towns.
Commission needs municipal partners

Nichols told the council that the commission needs Hamilton and Winfield, the two largest municipalities in the county, to help with the jail, but it will be approaching the smaller municipalities, too.

Hunt told the council that over the past years, Hamilton has spent $50,000 a year to house its inmates and Winfield has spent about $32,000 annually.

“I think it would behoove the city to take care of the percentage of the jail it uses, at least,” Burleson said.
“What it boils down to is Hamilton, Winfield and the county paying for the new jail,” Cochran said.

According to the commission’s plan, the county would be paying 60% of the jail cost and Hamilton and Winfield would each be paying about 20%.

Burleson acknowledged that there was some pressure on the cities and towns to join the plan, but explained that the commission is under similar pressure from the federal government.

Nichols said the county needs a new jail immediately to avoid the federal government from stepping in and ordering the commission to build one, which he said could triple the costs as the feds would dictate the jail’s specifications and funding sources.

“If the feds come in, all bets are off at that point,” Hunt said.

Burleson told the council if the jail is going to move forward this year, agreements would need to made as soon as possible.

Nichols told the council the new jail could be similar to the $6 million Fayette County Jail, which is 12,000-square-feet and was built to house 125 inmates. He said the jail was built on three-quarters of an acre in downtown Fayette and has enough room in its cell blocks to add an additional 50 beds, if needed.

The contractor who built the Fayette jail could use the same plans for a new Marion County facility and  simply adjust to increase the jail to around 14,000 square feet, Nichols said, noting a facility that size could house 150-175 inmates and have enough room to add 50 more beds, when needed.

According to Nichols, the design of the jail would have cell blocks branching out from a central building. The design would allow for additional cell blocks to be constructed as necessary.

“He told me that he thought he could put us in it for $8 million,” Nichols said. “We’re just looking at the high number. We think that’s a good deal.”

Burleson noted that the current Marion County Jail was built to house 70 inmates. Now, however, the jail regularly houses about 150 inmates at any given time.
Page asked if the commission has considered the jails’ architecture and design and if it would compliment the surrounding facilities in the industrial park. Nichols said that would be possible.

Marion County Sheriff Kevin Williams said he believes the commission’s plan is adequate and likely the best way to do it.

“The only alternative is for us to raise taxes, and no one wants that,” Williams said.

The sheriff said he has toured the Fayette jail and believes the design would work well for Marion County.

However, he believes the commission needs to consider going much larger.