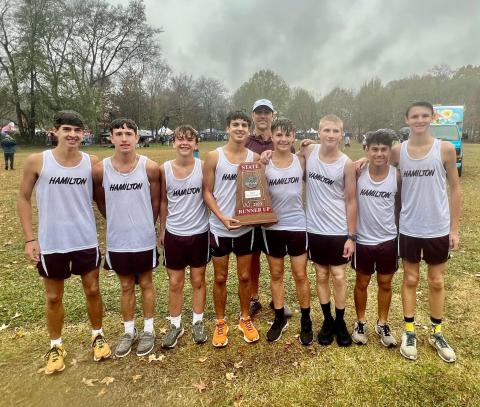 By Luke Brantley
Staff writer
OAKVILLE INDIAN MOUNDS  —  Hamilton, Marion County and Winfield schools each traveled to Oakville on Saturday, Nov. 5, to run through the rain and mud in the 2022 state cross country meet.
Hamilton’s boys placed second with 106 points as the top public school finisher, behind Providence Christian School in first place with 48 points.
Freshman Joshua Webb finished in tenth place in the 4A boys’ meet with a time of 17:06. Sophomore Maya Jones placed 16th in the girls’ meet with a time of 21:02.
Hamilton’s girls missed third place by one point with 129 points. Priceville was third with 128 points, Houston Academy placed second with 88 points and Providence Christians’ girls also won their meet with 69 points.
Head Cross Country Coach Scotty Sanford said he was extremely proud of his team’s performance, especially given how young the team is.
“Going in, I would have loved just top five for boys and girls,” he said. “For the boys to get second, I’m ecstatic about that, because we’ve got everyone coming back next year on the girls’ and boys’ sides.
“Several years ago, Hamilton won five state cross country meets in a row back when we were in 5A, so this isn’t new to us, but it is new to this generation.
“For the boys to do that and to be so young, I can’t wait for next year. The girls were fourth, one point out of third place. Our top five runners were two seventh graders, two ninth graders and a tenth grader. For them to be one point out of third, I’m looking at them next year to bring home the map.”
Sanford said he wants to push his team to build on their success for next season.
“We talked about it afterward that they should be happy but not satisfied,” he said. “The boys still have another spot they can move up, and the girls need to move up a couple of spots, so there’s a lot to work on between now and next year to get to that point. We’re excited about next year.”
Sanford thanked his fellow coaches and the community for all they did for the team this season.
“I want to thank our community and all the coaches and parents that helped,” he said. “We couldn’t have done it without all of them. It wasn’t just the runners and me by no means. Without Coach Steve Dudley, we wouldn’t have been there. He sends me the workouts, and I administer them. Without him and Coach Brian Wiginton, there’s just no way we could have accomplished what we did without everyone working together. It was a group effort, and I really appreciate them.”
Marion County High School’s girls’ team ran in the Red Raiders’ first ever state meet appearance. The girls finished in 12th place with 274 points.
The top finisher for the girls’ team was Alexis Webb, who finished 29th in a time of 23:12.
Marion County’s Carter Stephens ran in the boys’ meet as an individual after qualifying during the sectional meet. Carter, a freshman, placed 72nd in a time of 20:48.
“The weather turned ugly about an hour before our races were to begin,” he said. “It was not what anyone preferred, but we talked a lot during the season about not worrying about those things we cannot control and focus only on what we can.  Despite the mud and rain, our athletes performed exceptionally well.
“Lexi Webb finished with a top 30 finish in the girls’ race, and the girls’ team earned a 12th place finish in all of 1A / 2A. It was certainly a memorable finish to a historical season for our athletes. We will miss our seniors, Anna Kate Shirley and Reese Harris. They were the foundation for lots of great things ahead for this team. The future is bright for MCHS cross country.”
Winfield’s girls ended up in 14th place with 363 points, just behind Fayette County High School with 352 points.
Winfield’s top runner was seventh grader Audrey Spillers, who placed 33rd with a time of 22:23.
Coach Jessica Bishop said that, “Conditions were not favorable, but I’m proud of the team for qualifying for the first time in several years.”