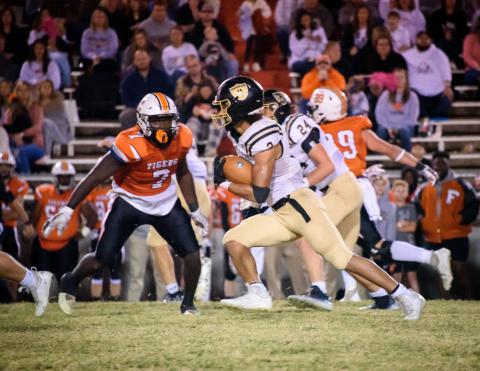 By Derek Trimm
Winfield Correspondent
FAYETTE — The Winfield Pirates won the 600th game in school history with a 25-13 come from behind win over the Fayette County Tigers on Friday, Oct. 14 in Fayette.
The win improved Winfield to 7-1 on the season and 4-1 in Class 3A, Region 5, and also clinched a playoff berth.
Winfield trailed 13-0 going into the second quarter when the Pirates rolled off 25 unanswered points and held the Tigers out of the end zone the rest of the night to secure the region win.
Turnovers gave Winfield trouble as the Pirates had four on the night, with one resulting in a Tigers’ touchdown on a scoop and score.
“It’s a big region win,” said Winfield head coach David McKinney in an interview following the game. “This should lock up the number two seed in the playoffs. I’m not for sure on that yet, but we are excited about it.
“A lot of things went wrong for us tonight,” McKinney said. “Our guys kept fighting and fighting.
“We told the players what it would be like coming into tonight, and it played exactly like we said it would.
“I am proud of our coaches and community. We had a great crowd here, and our student section was great,” said McKinney. “Any time you win here at Fayette, it is a big win.”
Fayette County received the opening kick off and used up 8:17 of the first quarter on its first drive using 19 plays to cover 76 yards.
Tigers’ quarterback Blake Johnson finished off the long drive with a six yard touchdown pass to Cooper Sanford.
Isaiah Stowe added the extra point to put Fayette County up 7-0.
Winfield’s first drive ended as soon as it started as Fayette County forced and recovered a fumble at the Winfield 45 yard line.
The Pirates’ defense anchored down and forced a Fayette County punt, and Winfield took over at their own 14 yard line.
The Pirates, again, would fumble on its first play of the drive and Fayette County’s

Brian Watts came out of the pile with the football and scooted 14 yards for a scoop and score touchdown.
Stowe's extra point attempt missed its mark, and Fayette County stretched its lead to 13-0 with 12 seconds left in the first quarter.
On the ensuing drive, Winfield put together a 15 play 52 yard drive as the Pirates used a mix of runs and passes to move the ball down to the Tigers’ 16 yard line.
Winfield quarterback passed to Drew Cook out of the backfield on a screen, and Cook raced through the Tigers’ defense for the 16 yard touchdown pass and catch.
Jacob Barnes added the extra point, and Winfield cut the Fayette County lead to 13-7 with 6:52 left in the first half.
Both teams traded possessions to end the first half with Fayette County still holding a 13-7 lead.
Winfield got the ball to start the second half and went right to work from their own 43, as Quinn passed to Thackary Box who made a catch between two defenders for 33 yards to the Tigers’ 24.
Cook, Quinn and Keylan Hughes, each rushed and together moved the ball to the Fayette County 3 yard line.
Facing a third-and-goal at the 3, Cook took the snap as the wildcat quarterback and threw a jump pass to Camden Elliott for the touchdown.
The extra point was no good, but Winfield knotted the game at 13-13..
Fayette County got their offense going on the next drive, but Winfield’s defense held the Tigers on a fourth-and-11 and got the ball back at the Winfield 34 yard line.
The drive started off with Cook and Quinn each running for 14 and 12 yards respectively, but the drive ended with a fumble recovered by Fayette County.
The Pirates’ defense forced a punt on the Tigers’ drive after the turnover, and Winfield took over at their own 30 yard line.
After an incompletion on first down, Cook ran for 9 yards to the 39 yard line. Cook then took the handoff on third-and-1 and raced past all defenders for a 61 yard touchdown run.
The two-point conversion pass by Cook was incomplete, but Winfield took the lead at 19-13.
Winfield stood tall on defense and forced a turnover on downs and took over at their own 31 yard line.
The Pirates went back to the running game and picked up yards to their own 40, but penalties pushed Winfield back to their own 29.
Hughes found a crease in the Tigers’ defense and scampered for a 71 yard touchdown. Barnes' extra point was no good, but Winfield stretched its lead to 25-13. Winfield was able to hold the Tigers out of the end zone the rest of the quarter to put a lid on the region game victory.
Winfield finished the game with 375 total yards, with 130 passing and 245 passing yards.
Quinn completed 8-of-15 passes for 127 yards and a touchdown. Cook completed his only pass attempt for 3 yards and a touchdown.
Cook led the rushing attack with 15 carries for 119 yards and a touchdown. Hughes ran eight times for 91 yards and a score. Quinn ran five times for 29 yards. D’Angelo Bankhead ran once for 6 yards.
Box led the receivers with two catches for 53 yards. Sean Wyers caught two balls for 35 yards. Cook had a catch for 16 yards and a touchdown. Bankhead grabbed two catches for 14 yards. Miles Gann had a catch for 9 yards, and Elliott had a catch for 3 yards and a score.
Defensively Cook, Conner Ballard, Blake Ballard, Levi Gilbert and Ezerick Johnson each had a sack.
Winfield (7-1, 4-1 in Class 3A, Region 5) will host the Oakman Wildcats (3-5, 3-2 in Class 3A, Region 5) on Friday, Oct. 21 at Estes Hudson Stadium in Winfield.