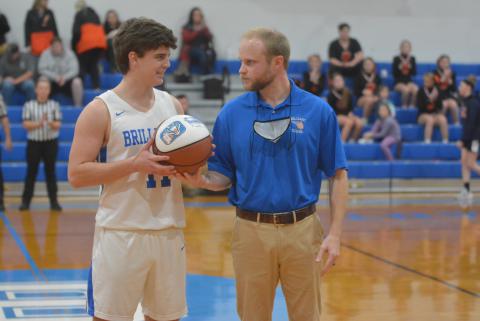 Brilliant High School Senior Kade Bryant (11) receives a commemorative basketball from Brilliant Tigers Head Coach Ryan Sanderson (right) during a pre-game ceremony on Jan. 25, in honor of the Tigers’ guard crossing the 2,000-career-point threshold. Bryant, who has been playing varsity basketball since seventh grade, achieved the milestone during the Tigers’ game against St. Bernard Prep on Jan. 15, when Brilliant won 58-53. “I have coached Kade for five years at Brilliant High school,” said Sanderson. “He has achieved many great things during his time playing on the court. In eighth grade he scored more than 20 points in several games, and I knew at that time he was going to end up scoring a bunch of points at Brilliant. In tenth grade he averaged over 20 points a game and reached 1,000 career points. Kade worked very hard to reach this milestone and I was proud to see him accomplish this. Kade not only contributed by scoring during his time, but he also led the team in rebounds from ninth grade to 12th grade. Kade also helped lead the team to the playoffs during his junior year. Kade’s performance on the court has helped elevate the Brilliant Tiger basketball program.” [Contributed]