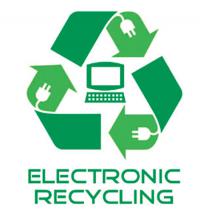 HAMILTON -  The Marion County Commission has announced that it will be holding an electronics recycling event on Saturday, April 13, from 8 a.m. to noon at the CDL testing site on Dr. Pyle Drive in Hamilton.
During the event, individuals are welcome to bring old electronic devices to be recycled.
Items that can be recycled include:
• Copiers;
• Fax machines;
• Printers (desktop or floor size);
• Computers;
• Telephone equipment;
• Power backups;
• Servers;
• Small appliances;
• Televisions; and 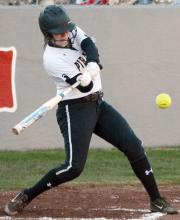 CARBON HILL - Winfield toppled Cordova 7-3 in the finals of the Bill Collins Classic held at Carbon Hill High School on Saturday, March 23.
Cordova led 1-0 through the first three innings after scoring in the first frame. The Lady Devils added to their lead in the fourth with another run.
Winfield responded with four runs in the bottom of the fourth inning to take a 4-2 lead into the fifth.
After holding Cordova scoreless in the fifth, Winfield added three runs to its lead to take a 7-2 advantage.

Winfield’s Ben Parrish (15) throws across the diamond to first base to record an out during the Marion County Baseball Tournament on Thursday, March 7. Also shown is Marion County High School head coach William Box.

GULF SHORES - Class 3A Winfield downed Class 6A Minor 11-10 in the Gulf Coast Classic II in Gulf Shores.
Winfield is ranked No. 4 in the Alabama Sports Writers Association’s Class 3A poll.
The Pirates’ Jack Williamson claimed the victory in a relief appearance. He pitched 1 2/3 innings and allowed two hits and one earned run while striking out three.
Brock Hollingsworth collected two hits and two RBIs. Jackson Elkins added two hits and a RBI.

WINFIELD - An investigation into an armed robbery led to the arrest of a Hamilton man and a Winfield store clerk on theft of property charges, the Winfield Police Department reported last week.

BRILLIANT - The body of a Carbon Hill man missing since January was found by a land-owner clearing a four-wheeler path north of Brilliant on Sunday, March 24.

HAMILTON -  Bevill State Community College (BSCC) has received a $4,900 grant from Alabama Power through their Good Roots campaign at Bevill‘s Hamilton campus on Friday, March  1.
These funds will be used to plant trees and fund various landscaping projects on each of the five campuses.
Bevill’s Hamilton campus received $1,000 from the grant and used the money to purchase seven Crepe Myrtles.
Dr. Kim Ennis, president of BSCC, expressed her thanks to Alabama Power for supporting the campuses with the grant.

HAMILTON - This Friday, April 5, the Hamilton Area of Chamber of Commerce will be kicking off the first of three “First Friday” downtown shopping events.
The event will take place from 6-9 p.m. with local and satellite vendors setting up booths lining the city square and downtown businesses extending their usual hours to host shoppers.
Food will be available for purchase during First Fridays at Leonelli’s First Avenue Grill, Coffee Buzz and potentially other food trucks.

MONTGOMERY - Marion County’s unemployment rate was marked at 4.6 percent in February, according to Alabama Department of Labor Secretary Fitzgerald Washington, six points lower than January’s rate of 5.1 percent.
Meanwhile, the State of Alabama’s unemployment rate continues to break records as it has now decreased to the lowest recorded rate on record, 3.7 percent—one point lower than January’s 3.8 percent, which also set the record.

WINFIELD - Great first impressions are hard to make, but the City of Winfield succeeded grandly last week when the Alabama Speaker of the  House, Mac McCutcheon, came to town.
McCutcheon, along with District 17 Rep. Tracy Estes, met with local leaders at a Winfield Chamber of Commerce meeting to discuss issues affecting the town.
“I really enjoyed the event, McCutcheon said. “It was good to sit down and meet with local leaders as well as leaders in the business community.”

GUIN - Marion County defeated rival Hackleburg 19-9 in the Northwest Alabama Conference Baseball Tournament finals on Saturday, March 16.
The Red Raiders scored three runs in the bottom of the first. Hackleburg responded with a run in the top of the second before Marion County added seven runs in the bottom of the frame to hold a 10-1 advantage.
The Panthers scored two in the fourth and six in the fifth to trim Marion County’s lead to 10-9. 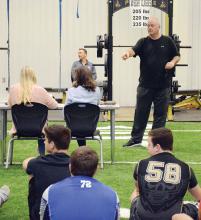 Winfield head football coach David McKinney (standing, right) give directions to the lifters during the 2019 Winfield Invitational Powerlifting Meet on Wednesday, March 20. The meet saw 110 total competitors in the 18 different weight classes. More photos can be found on page 7B.

WINFIELD - Winfield hosted the 2019 Winfield Invitational Powerlifting Meet on Wednesday, March 20, at the Winfield City High School Indoor Athletic Facility.
Brilliant, Marion County and Lamar County participated in the meet, along with Winfield. No team winners were named, just individual winners by weight division.
The event started at 8 a.m. with each participant weighing in before the lifting began at 9:30 a.m. 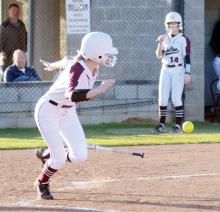 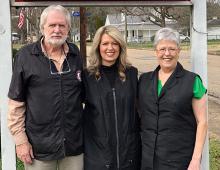