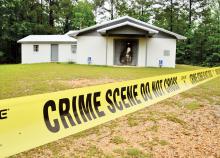 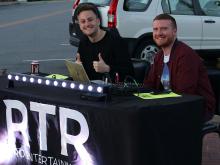 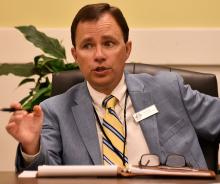 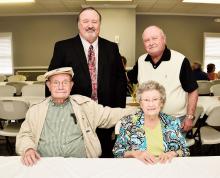 GUIN - The Winfield Lady Pirates won the Marion County Softball Tournament after defeating Marion County 15-0 behind Andrea Harbin’s four-hit performance in the if-necessary game on Monday, April 15.
The tournament resumed play after being postponed due to an extended lightning delay on Saturday, April 6.
Winfield scored five runs in the first inning before adding three in the second frame.
The Lady Pirates captured the 15-run victory after scoring seven runs in the fourth to earn the county crown. 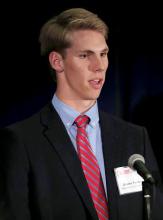 BIRMINGHAM - Marion County High School senior Braden Pyron was named the overall winner of the Bryant-Jordan Student-Athlete Scholarship on Monday, April 8.
The scholarship has two categories with one being achievement and the other recognizing student-athletes.
Pyron was recognized as the winner of the student-athlete category for Class 1A and overall throughout all seven classifications.
“It’s an honor to be recognized, especially coming from a small school,” Pyron said of winning the award.

Winfield’s Jackson Elkins (25) celebrates after scoring on his hit to the outfield in the first game of the Alabama High School Athletic Association’s Class 3A State Baseball Playoffs. Elkins collected three RBIs on the hit.

WINFIELD - Winfield downed Weaver 19-6 in the Pirates’ second game of the Alabama High School Athletic Association’s Class 3A state playoffs on Saturday, April 20.
The Pirates are ranked No. 2 in the final Alabama Sports Writers Association’s Class 3A poll.
Winfield’s Ben Parrish earned the win in 4 1/3 innings and allowed seven hits and five earned runs with four strikeouts.
Jackson Elkins pitched 1 2/3 innings and allowed one hit with no earned runs. He struck out two.

Late in the night of April 13, an EF-1 tornado touched down in western Marion County.

It is a foregone conclusion that a Republican will take out our anomaly, liberal Democratic Sen. Doug Jones, next year. The question is, which Republican will be the nominee and capture the seat?