HAMILTON - The Hamilton Area Chamber of Commerce has announced that the 14th Annual Buttahatchee River Fall Fest will be rescheduled for Saturday, Nov. 2, beginning at 9 a.m. and ending at 3 p.m. in downtown Hamilton.
The chamber made the decision to postpone the event due to concerns surrounding the weather on the original Saturday, Oct. 26, festival date.
NTN-Bower also announced it would be rescheduling its trunk-or-treat event for for Nov. 2, as well. It will begin at 7 p.m.

HAMILTON - In October 1978, Hamilton became the home to a young, rising journalist, eager to sink his pen and ink into the newspaper business.
James Lesley Walters, longtime editor for the Journal Record, moved to Marion County that year on a business venture with The Itawamba County Times of Fulton, Miss., where a new Hamilton newspaper would be launching, The Hamilton Progress.

HAMILTON - The Marion County School System has improved its annual report card score by one point, but reactions are mixed as administrators believe they could have been named among the few A’s in the state.
The Alabama State Department of Education (ALSDE) published its 2018-2019 Education Report Cards on Friday, Oct. 18. The Marion County School System earned an 88 (B)—a one-point jump from the 2017-2018 school year.
Out of Alabama’s 137 school districts, there were 23 A’s, 80 B’s, 29 C’s and 3 D’s.

WINFIELD - The Winfield City School System has earned an 89 on its report card for the 2018-2019 school year— an improvement over the previous school year’s score of 88.
The Alabama State Department of Education (ALSDE) published its 2018-2019 Education Report Cards on Friday, Oct. 18.
Out of Alabama’s 137 school districts, there were 23 A’s, 80 B’s, 29 C’s and 3 D’s.
“It’s not where we wanted to be, but we’re moving in the right direction,” said Winfield Superintendent of Education Chris Cook.

HAMILTON - Journal Record readers are reminded to turn their clocks back one hour at 2 a.m. on Sunday, Nov. 3, as Daylight Saving Time ends and we return to Standard Time. The change will allow for an extra hour of sleep on Sunday.
Daylight Saving Time (DST) begins on the second Sunday in March and ends the first Sunday in November.

HAMILTON - U.S. Senate Republican candidate Tommy Tuberville addressed the Marion County Republican Party at J&V’s Ole Smokehouse in Hamilton on Saturday, Oct. 12.
“I want to help, I was never in the military, but I want to give public service,” said Tuberville, addressing the individuals in attendance. “I’ve had a job for 40 years, I’ve been out in the public and I’ve seen where we hurt. Our education is in bad shape, we’re broke as a country and we have huge problems everywhere.”

Taylon Lothrop installs a window regulator on an 18-wheeler at Brilliant High School on Thursday, Sept. 26.

BRILLIANT - Students in the Marion County School system now have the opportunity to take a dual enrollment diesel mechanics class that could put them in the driver’s seat to a well-paying job in the future.
The class is being hosted at Brilliant High School and is a partnership between Bevill State Community College-Hamilton and the Marion County School System. 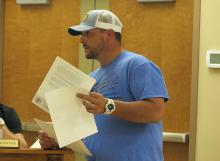 HAMILTON - Dress up the kids and grab a bag.
NTN-Bower in Hamilton will be hosting its third annual “trunk-or-treat” Halloween event on Saturday, Oct. 26.
Event coordinator Jason Price said they are expecting as many as 1,500 people to attend the event.
The event is open to everyone and will kick off at 7 p.m. and for an entire hour treat-or-treaters will be able to go from car to car to gather bag-fulls of candy.

HAMILTON - The Hamilton Kiwanis Club will once again sell smoked Thanksgiving turkeys as a fundraiser, but this year the club will also offer smoked half-hams.
A 10-12 pound turkey or a half-ham, both smoked and ready to heat, can be purchased from any Kiwanis member from now until Monday, Nov. 18.
The group will use the proceeds from the smoked turkey fundraiser to make its annual donation to Christmas for Kids and to fund and prepare the club’s Christmas food baskets for the needy.

HAMILTON - The Marion County Probate Judge’s office is being recognized for its improvement in registering motorists to be organ donors.
Legacy of Hope, a Birmingham-based organ procurement organization, announced the local probate office as the second most improved department of motor vehicle (DMV) offices in the state.
The organization held a special reception for the local probate office and staff on Friday, Sept. 27, at the Marion County Courthouse in Hamilton.

HAMILTON - The Marion County Probate Judge’s office is being recognized for its improvement in registering motorists to be organ donors.
Legacy of Hope, a Birmingham-based organ procurement organization, announced the local probate office as the second most improved department of motor vehicle (DMV) offices in the state.
The organization held a special reception for the local probate office and staff on Friday, Sept. 27, at the Marion County Courthouse in Hamilton.

HAMILTON - The Hamilton Area Chamber of Commerce will be hosting the 14th Annual Buttahatchee River Fall Festival on Saturday, Oct. 26, in downtown Hamilton.
The fall festival, which will officially kick off at 9 that morning, is a family-friendly event and there is no charge for admission.
This year’s festival will be as jam-packed with fun for the whole family as it has been in the past, according to Hamilton chamber president Lacy Williams.

WINFIELD - The Winfield City Council voted to approve a 25 cents per-hour raise for all Winfield city employees  at the council’s Tuesday, Oct. 1, meeting. The raise affected all full-time and part-time employees and went into effect the next pay period.
City administrator Mike Watkins presented the city’s 2019-2020 budget to the council for approval which factored in the raise.
Winfield Mayor Randy Price chose to hold two separate votes on the raise and the budget approval. 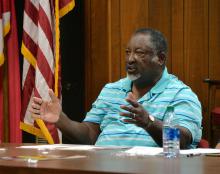 Guin City Councilman Roger Agnew says the council needs to be given more detailed bank statements during a work session on Monday, Oct. 7.

HAMILTON -  Double-homicide suspect Jimmy Cooper is back in the Marion County Jail in Hamilton after returning from a nine-month stay at the Taylor Hardin Secure Medical Facility in Tuscaloosa.
Marion County Sheriff Kevin Williams confirmed with the Journal Record that Cooper was booked back into the jail on Thursday, Oct. 10.

HAMILTON - Five streets in Hamilton have received the go-ahead for a new layer of asphalt—a project valued at more than $316,000.
The Hamilton City Council unanimously voted at its meeting on Monday, Oct. 7, to accept a bid by S.T. Bunn Construction in Tuscaloosa for $316,728 for the work.
The city will designate $116,728 out of the its general fund to fund the improvements.