The Marion County Commission met with the Hamilton City Council during a work session on Wednesday, March 11.>

HAMILTON - A new Marion County Jail is beginning to become more of a reality.
The Hamilton City Council voted unanimously during its Monday, March 16, meeting to pledge $200,000 a year to the Marion County Commission to help cover payments for up to a $10 million bond for a new jail.
The pledge was passed with a provision that the commission not raise lock-up fees for the Hamilton Police Department.

MARION COUNTY -  The Marion County Commission urges citizens to be diligent in their efforts to stay informed and to participate in mitigation activities to help reduce the exposure and spread of COVID-19, commonly referred to as the coronavirus.

HAMILTON - Adhering to state-ordered health policies could reduce the local impact of novel coronavirus (COVID-19) by 80%, said state Sen. Garlan Gudger, during a meeting with 19 Marion County industry leaders and officials.
The senator and state Rep. Tracy Estes met with a cross-section of officials in law enforcement, health care and education on Wednesday morning, March 25, to discuss the local response and needs associated with the coronavirus outbreak.

MONTGOMERY - Gov. Kay Ivey signed a proclamation giving governmental bodies in the state the ability to hold meetings via telephone conference, video conference or other similar communications equipment.
The proclamation affects bodies such as the Marion County Commission, city and town councils and boards of education within the county that are unable to hold open public meetings with 25 or more individuals.
This is due to new guidelines under the current state of emergency caused by the COVID-19 outbreak.

MONTGOMERY -  Gov. Kay Ivey rescheduled the runoff election originally scheduled for Tuesday, March 31, for Tuesday, July 14.
This occurred following the outbreak of the Coronavirus (COVID-19) in the State of Alabama and the declaration of a National Emergency by President Donald Trump and the declaration of a State of Emergency by Ivey.
Alabama Secretary of State John Merrill requested an emergency opinion from Alabama Attorney General  Steve Marshall’s Office related to the possible postponement of the March 31 Runoff Election.

HAMILTON - The Northwest Alabama Gas District (NWAGD) is continuing to grow in profitability.
Gas district accountant Greg Guin presented the Fiscal Year 2019 audit during a NWAGD board meeting on Monday, March 2, telling the board there is $1.6 million available to be declared as ANDI monies, which stands for “annual net distributable income.”

HAMILTON - NTN-Bower Hamilton was recently involved in creating a sensory board for the Hamilton middle and elementary schools.
The sensory board will allow students to take a break from classwork and recharge. The board gives them an opportunity to use their fine and gross motor skills.
The idea for sensory boards at the schools was brought to NTN-Bower Hamilton by NTN Vice President and Treasurer Steve Hensley, whose daughter is a special education teacher who focuses on students with autism.

In an attempt to curb the spread of COVID-19, Marion County's commission and probate judge's offices have issued a 24-hour public safety curfew and countywide at-home quarantine effective Monday, March 30, at 5 p.m.

Gov. Kay Ivey announced today that all non-essential businesses are ordered to be closed to non-employees effective tomorrow at 5 p.m. (Saturday, March 28) in order to fight the spread of COVID-19. The order is in effect until 5 p.m. on Friday, April 17 when a determination on extending the order will be made.

As of today (Friday, March 27), Alabama has tested 4,755 people for the virus, with 587 positive cases and three deaths.

Educators were preparing for students to return to classrooms on Monday, April 6. Marion County and Winfield City schools have been closed since Monday, March 16. 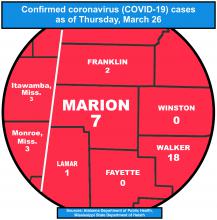 HAMILTON - A new Marion County Jail is beginning to become more of a reality.

The Hamilton City Council voted unanimously during its Monday, March 16, meeting to pledge $200,000 a year to the Marion County Commission to help cover payments for up to a $10 million bond for a new jail.

The pledge was passed with a provision that the commission not raise lock-up fees for the Hamilton Police Department.

HAMILTON - Construction on Hamilton’s new Love’s Travel Stop and Country Store has been pushed back again.

Hamilton Mayor Bob Page told the council during a work session held on Wednesday, Feb. 26, that Love’s March 21 start date has been delayed until April.

Love’s officials had projected construction on its new $12 million facility to begin in December. The store will be located off Interstate 22’s Exit 14 in Hamilton, off County Road 35 and River Road Drive.

The Alabama Department of Public Health (ADPH) confirmed on Saturday, March 21, that it had recorded Marion County's first case of the virus. Colburn made a statement on social media the next day (Sunday, March 22) notifying the public that the case was in his town. 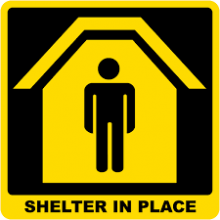 TUPELO, MISS. - Mayor Jason Shelton has issued a shelter-in-place order for Tupelo, Miss., in an attempt to stifle the spread of COVID-19.

The order restricts travel only to and from essential businesses and self and family care.

Estes told the Journal Record state health officials contacted him Saturday morning, March 21, to inform him of the positive test. The state health department said it would not be providing any other information regarding the case. 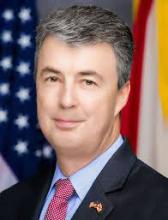 MONTGOMERY—Attorney General Steve Marshall warns those who would seek to illegally profit from the current public health emergency that Alabama’s price gouging law has been activated.
On March 13, 2020, Gov. Kay Ivey declared a State Public Health Emergency in Alabama relating to the appearance of the 2019 novel coronavirus known as COVID-19.  Alabama’s price gouging law comes into effect when the governor declares a State of Emergency and it prohibits the “unconscionable pricing” of items for sale or rent.

Alabama Power is sharing information on a scam targeting customers over the phone claiming to be a representative from Alabama Power and requesting immediate payment on accounts.
In some instances, scammers have altered a customer’s caller ID to falsely read Alabama Power Company. 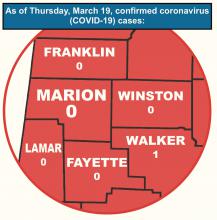 Walker County, which borders the southeast corner of Marion County, has confirmed its first case of coronavirus.

The following counties have confirmed COVID-19 cases by the Alabama Department of Public Health:

MONTGOMERY – Gov. Kay Ivey and the Alabama Department of Public Health (ADPH) on Thursday, March 19, issued a statewide health order to aid in Alabama’s efforts to contain the spread of the Coronavirus (COVID-19).