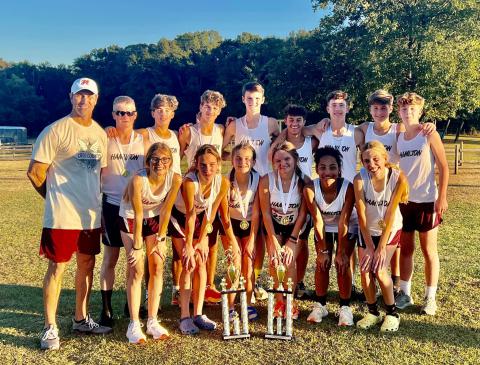 By Luke Brantley
Staff writer
MARION COUNTY —  Last Thursday, Oct. 27, Marion County cross country teams competed in sectionals to determine who would advance to the state meet.
Marion County High School, Winfield City High School and Hamilton High School will each be sending at least one team to compete in the state meet at the Oakville Indian Mounds on Saturday, Nov. 5.
Marion County High School’s girls’ team finished in fourth at sectionals with 95 points, just making the cut to qualify for state. They finished behind Hatton (63 points), Athens Bible School (79 points) and Lexington (87 points).
According to coach Bobby Bellew, their fourth-place finish at sectionals made school history.
“The top four teams go to state, and we snuck in at number four for the first time in school history for boys or girls,” Bellew said. “We’re really, really proud of their efforts and the work they’ve put in. It’s really hard training. It’s a lot of hours, miles, speed work and drive that it takes to do this sport.”
Bellew said this year’s team was very young but has grown in strength and numbers.
“Last year we started growing as a team,” he said. “I think we had five boys and two girls last year. This year we grew to eight girls and nine boys, so we were able to fill out an official team since we had at least five on each team. We were able to qualify as a team for sectionals, both boys and girls. We had some really good meets this year, lots of personal records for our folks and we had lots of new runners come out this year, too. We had some elite finishes for our girls and boys. We had some really good performances this year.”
“Going into sectionals, I thought our girls had a pretty good chance of qualifying. We’re in a very tough section for boys and girls because they combined 1A and 2A, and we’re in a section with some historically really good public and private schools. I knew it would be tough, but the girls seemed to have a shot based on projections we made throughout the year. So at sectionals, we went in pretty confident, but we also went in with several of our runners sick or getting over some kind of sickness, so we were a little wounded. But we had some really good performances from our top two girl runners, Lexi Webb and Zoe Lucas. Without those performances we wouldn’t have had a chance to qualify for state.”
On the boys’ team, Marion County’s Carter Stephens qualified for the state meet as an individual runner after finishing 21st at state with a time of 19:54.
Bellew said advancing to state is exciting, and the team aims to make the most of their first state appearance.
“We’re very excited,” he said. “Just the act of getting there is a huge accomplishment for a very young team. We’re really excited about the future of the program. We’re excited to be able to run at the state meet. There will be some really good teams there, like Cold Springs, Hatton, Lexington and some others across the state that will be really tough. If we can finish middle of the pack or better next week, that will really be an accomplishment at this point, as young as we are. Getting to the state meet is the icing on the cake for us. We’re going to go out there and do our best and rack up a few more personal bests and see where we land. Our girls are committed, they’re driven, they’re confident and they’re proud of their accomplishment at sectionals. I told them 20 years from now, when hopefully we’ve got a few of those plaques on the wall, that they’ll remember this team as the very first cross country team to ever accomplish that at Marion County High School.”

Hamilton High School also has a young team this season, but the Aggies made a strong showing at sectionals, dominating both the boys’ and girls’ meets with almost perfect scores.
“The girls finished first, second, third, fourth and seventh—almost a perfect score,” said coach Scotty Sanford. “The boys were almost the same. They finished first, third, fourth, fifth and eighth. We had a very strong showing at sectionals.”
In cross country, scores are based on the position a runner finishes in, so the lowest score wins. A perfect score is 15 points. Hamilton’s girls won with 17 points, and the boys won with 21 points.
Sanford said the two first-place finishes were a great result for such a young team that didn’t even begin the season as a full team.
“We actually started the season with only two girls running, so we didn’t even have enough for a team,” he said. “Then one got through with volleyball, and I recruited three others, since you have to have five for a team. Midway through the season we ended having a team, and by the end of the season we were ranked first in 4A Section 2. We had a lot of boys running. We had plenty, but most of the season they’ve also been ranked first in the section. So the season’s gone really well. Both of our top runners on the boys and girls’ side for most of the season have been ranked first in 4A Section 2.”
Sanford highlighted his team’s accomplishments, especially given how young his team is.
“At sectionals, we were expecting to win, but you have to go run it for a reason,” he said. “You never know what might happen. I’m very excited for the kids. They’ve been working very hard since this summer. They’ve been running really hard all season. Going to state, I’ll be very happy with a top-five finish at state, because a lot of the teams that are ranked ahead of us are from private schools, so a top five finish will make me very happy.
“On the girls’ side, we have six runners, and one is a tenth grader. The rest are seventh, eighth and ninth graders. On the boys’ side, we have eight runners, and out of our top five, one is an 11th grader, and the other four are ninth graders. It’s a very young team, especially the girls’ side. Hopefully I’ll be able to start a middle school team next year. Then by the time these kids get older and graduate, we’ll have runners ready to step in.”
This season has been Sanford’s first ever season to officially coach, and he says it’s been going well.
“It’s been great,” he said. “This is a great group of kids to work with. This is my first year to teach and my first foray into official coaching. I’ve helped with track the last couple of years, but I’ve just been a volunteer assistant. But as far as cross country, this is my first year to do that.”

The Winfield Pirates will be sending their girls’ team to the state meet this Saturday after they finished third with 80 points behind Lauderdale County (42 points) and Colbert Heights (57 points).
Seventh grader Aubrey Spillers finished in the top ten in sixth place in a time of 22:28.
Winfield also had a young team this year, according to coach Jessica Bishop.
“The season went well,” Bishop said. “We have a pretty young team; a lot of seventh and eighth graders, and I’ve got four seniors. We started off the season in September with Chickasaw trails, and they steadily made good progress, had several PRs throughout the season. Of course with seventh graders, this is their baseline year so they’re just trying to improve on their time each week. At sectionals, our boys ran well, but we’re in a really tough section of 3A, so they did not qualify, but our girls did qualify in third place at sectionals. We’re real proud of them.
“We’re just going to practice like normal this week. I told them that we’re going to have to run extremely well at state, because there’s going to be some tough competition for us. Our team is really young, and I’m really proud of them and the progress they’ve made, and I think they have a bright future in cross country at Winfield.”
Sanderson and Bellew said that cross country is a growing sport in Marion County, and they are appreciative of all the support.
“I want to thank everyone for the support they’ve given us this year,” Sanderson said. “From Facebook posts to people calling or stopping us in town. People are starting to take notice a little bit, and I think a lot of that has to do with the new track that’s being built. A lot of people have heard about that and are getting excited.”
“This is a growing sport in our community,” Bellew said. “Winfield, Hamilton and Marion County all have qualifying teams for state, and we all have very young teams. We see the excitement building in the community for it, and we love it. We’ve had a ton of support from our local businesses and individuals to help us get through the season. It’s a non-revenue-producing sport, so it requires some fundraising with some begging at times, but we were able to pay for the season without dipping into any other athletic accounts because of the community support that we’ve had. So I’m looking forward to the state meet and what the future holds for our boys and girls’ teams, as well as the rest of the county. It looks like cross country is going to be a sport that continues to grow here in Marion County.”