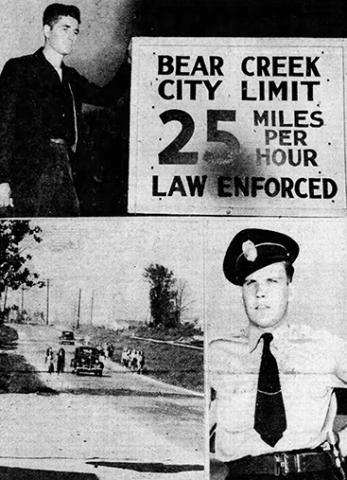 These pictures are proof that the town of Bear Creek has city limit signs, as it has been accused of not having. Top picture shows Mayor C.S. (Boots) Tidwell standing beside one of the signs that are located at each end of town. Photo at bottom (left) was made last spring in the city limits of Bear Creek, and shows automobiles passing school students who are forced to walk the highway to and from school daily. The picture was not posed. Lower rght is a likeness of the key figure of the Bear Creek “speed trap” story, Police Chief Warren G. Miller. The Alabama Motorists Association has accused him of illegal traffic arrests and of collecting speed fines.

HAMILTON -- The following story was published in the Haleyville Advertiser on January 20, 1949. It is posted here in reference to a photo in the new segment beginning this week in the Journal Record titled "Back Through the Years in Marion County..."

By Robert L. Shirley
Bear Creek, town of over 300 population located between Haleyville and Phil Campbell on Highway No. 5 (now 13) last week was warned it faced “legislative action to wipe it off the state map.”
The warning came in a resolution adopted by the board of directors of the Alabama Motorists Association.
In several articles given prominent space in The Birmingham News last week, Bear Creek was criticized and condemned for operating a “speed trap.”
Accusations were made by Bert M. Meadow, president of the Alabama Motorists Association, and W. B. Timmons, secretary-manager of the A.M.A.
The publicity thus given Bear Creek, in stories giving only one side of the situation, probably made the little Marion County town the most notorious spot in the entire state.
Among the accusations was one that “the town (Bear Creek) is supporting its public officials and itself by illegal traffic fines.”
Bear Creek, which was incorporated over 50 years ago was also condemned because: “Investigation shows it is nearly impossible for a motorist to realize he is in the incorporated community before he is victimized.”
“Warren G. Miller, Bear Creek police chief, has been collecting speed fines on the highway, thereby setting himself up as an officer, court and judge.”
“Wholesale and illegal arrests of motorists.”
“Motorists report they have been unable to find any signs showing the city limits of Bear Creek or noting the speed limit.”
“The town’s police chief refuses offending motorists a hearing before court or a justice of the peace, but demands the violator pay a fine on the spot.”
And much other unfavorable publicity. But nothing whatever was printed to give Bear Creek’s side of the story.
Wholesale arrests by Bear Creek policemen HAVE caused much indignation among motorists, both local and out-of-state. Unjust arrests should be condemned by all law-abiding citizens everywhere.
In recent months Bear Creek police has been one of the most discussed subjects in this area.
But no complaints have been heard by this writer of instances where Chief Miller was insulting, discourteous or abusive in manner while arresting traffic violators.
If he has been, or has illegally molested motorists, collected watches as fines, refused to give offenders a hearing before a court, or other violations he has been accused of, then he should be made to answer to the proper authorities.
But as far as has been proven, every motorists arrested was guilty as charged.

The “lid” was apparently blown off the Bear Creek “speed trap” set-up with the arrest of Euguene Costner, general superintendent of mines for Sloss-Sheffield Steel & Iron Company, Birmingham, on Jan. 10.
Birmingham News articles concerning Bear Creek started soon after Mr. Costner’s arrest. But The News failed to state what the big company executive was charged with.
Had the A.M.A.’s Mr. Timmons so desired, he could have announced that Mr. Costner was arrested and fined for passing a school bus while it was stopped unloading children. That is unlawful even in Mr. Timmons’ home city of Birmingham.
Police Chief Miller was in his car, stopped, behind the school bus when Mr. Costner passed it. Other witnesses were Johnny Hagan, bus driver, Mrs. Hazel Vickery, school lunchroom superintendent who was riding the bus with some of her children, and other students on the bus. Mr. Costner was brought before Mayor C.S. (Boots) Tidwell who imposed the minimum fine for the offense, $17.50. The motorist told the mayor he was guilty, and asked if there wasn’t a lower fine.
Costner refused to pay the fine, and wanted to sign his own bond. This not being the practice in Bear Creek, the offender was carried to the Marion County jail in Hamilton, where he was released after paying $27.50 in fines and costs.
Some weeks before the mine superintendent was fined, one of Bear Creek’s own business men citizens J.W. Garrard, was caught passing a school bus unloading children.
Mr. Garrard, unlike Mr. Costner, promptly paid his $17.50 fine. He told Mayor Tidwell that he unknowingly passed the bus, that he was guilty and should pay off. And he did.
Mr. Timmons, who set up headquarters in Haleyville last week and hired a local attorney to represent all motorists caught in Bear Creek, did not tell the thousands of Birmingham News readers this Bear Creek police policy of “treating everyone alike.”
Mr. Timmons did not bring out the fact that large signs bearing the letters “School”, “School Zone”, “Slow”, “Stop While Buses Load & Unload School Children”, “Bear Creek City Limit, 25 Miles Per Hour, Law Enforced”, are on both sides of the highway WITHIN THE CITY LIMITS OF BEAR CREEK.
He did not bring out the fact that well over 100 students, according to Principal Paul J. Weeks, must cross or walk on this highway daily to reach school.
The same gentleman who wants the neighborly little town of Bear Creek “wiped out” did not say it was right and lawful for motorists to slow up in this Bear Creek school zone as they are required to do elsewhere in the state of Alabama.
...
Principal Weeks of Phillips’ High is 100 percent for a traffic control system through Bear Creek. Under his supervision, a driving course, sponsored by the state, is now being conducted for students.
Yet, prior to the city hiring a policeman, students could listen to safety rules given by the driving instructor, and at the same time look toward the highway a few yards away and see motorists breaking those same rules...The A.M.A. charged “the town is supporting its public officials and itself by illegal traffic fines.” Council salaries are:
Aldermen Horace Phillips, L.R. Tidwell, D.J. Nelson, Rufus Foster and Hardy Phillips draw $2 each per month IF they do not miss any regular meetings. They get no pay for called meetings. Mayor Tidwell draws $15 per month...