Rev. Stancil dies at age 49 in battle with COVID-19 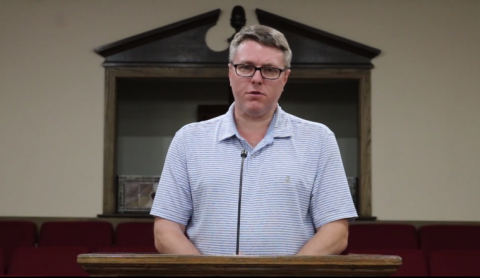 HAMILTON - Fulton Bridge Baptist Church pastor Rev. Michael “Mike” Stancil died Saturday, Dec. 26, after a six-week battle with COVID-19 complications.
Stancil, 49, served as pastor at the Fulton Bridge church since August 2011. He leaves behind his wife, Michelle; children - Lexi and Josh; parents - Lonnie and Dorothy Stancil; brother - Shane; and sister - Andrea.
A private graveside service will be held for Stancil today (Wednesday, Dec. 30).
Stancil’s death has been covered by The Christian Post,  AL(dot)com, The Alabama Baptist, ABC 33/40 and CBS 42.
According to Fulton Bridge Church Secretary Shirley Mitchell, Stancil was being hospitalized at Baptist Health Medical Center in Little Rock, Ark., at the time of his passing. He was transferred to the facility on Dec. 12 from the North Alabama Medical Center in Florence due to the availability of an extracorporeal membrane oxygenation machine (ECMO) and an intensive care unit (ICU) bed.
According to a public update from his wife on Dec. 22, Stancil was battling complications from a staph infection, sepsis, low blood pressure and kidney failure.
Church updates indicate Stancil had been battling COVID-19 infection and pneumonia since mid-November.
Fulton Bridge Church Deacon Chairman Gary Mixon addressed the church during services on Sunday morning, Dec. 27.
“The church has lost a pastor,” Mixon said. “But his family has lost a husband, a father, a son--we’re all hurting. As a body of believers, we need to lift this family up.”
Mixon said that the church has never experienced an untimely death of a pastor in its 110-year history.
“The only way we’ll get through this is with God’s help,” Mixon said.
Following the announcement, Mixon stated that in-person services have been canceled at the church for the first two weeks of January.
Through tears, Bro. Jeff Brantley preached to the Fulton Bridge Church on Dec. 27 from the Book of Daniel Chapter 3, emphasizing Verse 17-18, where Babylonian king Nebuchadnezzar threatens the Israelite slaves  Shadrach, Meshach and Abednego with the fiery furnace for refusing a mandate to worship an idol of himself.
“We need to have the same attitude they had: when they were personally confronted with their own death, they said, ‘God can deliver us--but even if he doesn’t, we’re still going to worship the one true God.’”
According to Mitchell, Fulton Bridge ended all in-person services when the pandemic broke out in the spring.
In a March 20 video announcing the beginning of live-streamed services, Stancil advocated for the congregation to use good judgment, follow health guidelines and increase their prayers.
For several weeks, services took place on the outside steps of the church. Attendees were invited to participate by parking in their vehicles and tuning their radios to a local frequency.
Mitchell said the church had slowly reopened under updated state health guidelines in the fall and Stancil had preached at two in-person services before testing positive for COVID-19.
“Mike Stancil was a good, godly man,” said Marion County Baptist Association Director of Missions Keith Box in a written statement to the newspaper.
“He was a model son, husband, dad, pastor and preacher. It is such an honor to be able to say that he was my friend. He had a love for Jesus that was amazing.
“Mike always tried to lead by example, so starting with his family, he wanted everyone to love Jesus as much as he did. He unconditionally loved his family. He honored his father and mother, and nothing other than Jesus took the place of his love for his wife and children.
“He knew the Bible well and loved nothing better than to preach and teach at Fulton Bridge Baptist Church or anywhere else that he got an opportunity. He loved his church and was a great pastor in every sense of the word. He loved Marion County Baptist Association and was on the search committee that called me to be Director of Missions. He supported the association and me in any and every way that he could. But to me personally, he was my brother and my friend. One that I could count on no matter what.
“He (Stancil) would always say to me, ‘I'm just one phone call or text away.’ I rejoice today that Mike is at home with Jesus, but there is a natural sadness because I miss my friend. For the rest of my days, I will remember his sense of humor and his laugh. I will remember his sincerity for serving the Lord and the way that he tried to love people the way that Jesus taught us to love people.
“Not only will I remember these things but I will also do my best to follow Mike's example and love the way Jesus taught us to love.”