New seasons lead to new records, players and coaches. However, there is one thing that stays the same under the Friday night lights: The expectation to win.
All eyes were on the Hamilton Aggies as they made the trip to face off against the Red Bay Tigers on Friday Aug. 20.
An electrifying offense led the charge for the Aggies, and it resulted in a 40-24 victory for Hamilton.

WINFIELD - It was a soggy rainy night in Winfield as the home-standing Pirates took on Fayette County Tigers in the 2021 season opener on Thursday, Aug. 19, at Estes Hudson Stadium.
Both teams struggled offensively and with the wet field conditions did not help matters as both teams traded turnovers. The Pirates connected on a pass with 2:17 left in the game to take the lead for good to claim the 6-0 victory over the Tigers.

Four Marion County schools will host home football games this Friday, Aug. 27.
Brilliant and Hackleburg will go head-to-head in an in-county rivalry.
This week all games continue to be non-regional match-ups. Region play will begin next week.
I’ve never made predictions before, but I’m happy I was able to follow these teams the first week before jumping into prognosticating.

HAMILTON - City officials are aiming at retail development in the city with a new contract with a Memphis, Tenn.-based consulting firm.
Hamilton City Councilors voted unanimously on Monday, Aug. 16, to enter into a one-year contract with NaviRetail group to promote retail development in the city.
Page told the Journal Record that Pontotoc, Miss., native and NaviRetail CEO Casey Kidd and Blake Spencer of Tupelo met with the city last month to propose a partnership.

WINFIELD — The Hackleburg Panthers defeated the Marion County Red Raiders in their season opener on Thursday, Aug. 19. The Panthers won in three sets: 25-17, 25-21 and 25-17.
Emma Harper was the top scorer for the Panthers with 14 kills and three errors our of 26 attempts. Avery Harper scored five kills with 0 errors out of eight attempts.

For me, there is nothing that spreads as violently and chaotically as misinformed arguments.
We have become knowers of all and learners of none.
Whether it's about COVID-19 or any social justice issues, everyone knows everything.
There’s no more humility in our hearts, there’s no kindness, no grace--just the spirit of know-it-all.
I’m not sure what causes it, exactly. Were we always like this and has social media just given us a platform to openly show just how awful we can be to one another?

Allow me to again open my political notebook for more summer political happenings in the Heart of Dixie.
As Labor Day approaches it looks as though the state constitutional officeholders, all Republicans, are going to escape serious or even any opposition. Lt. Gov. Will Ainsworth, Attorney General Steve Marshall and Agriculture Commissioner Rick Pate are running unopposed. However, all three are running aggressive campaigns or, as the old saying goes, are running scared.

HAMILTON - The Marion County Board of Education (BOE) reported a drastically lower number of online virtual learners in the system this year during the Marion County BOE meeting held on Tuesday, Aug. 17, at the Marion County School System’s central office in Hamilton.
Last year, the county school system’s online option experienced a 300% growth during the school year due to virtual school becoming an attractive alternative to parents who did not wish to have their children in schools due to the COVID-19 pandemic. The entrance to Arrowhead subdivision in Winfield, one of several streets that will be repaved in the city. The city will conduct a poll and talk to residents about additional improvements that could be made, such as removing a tree from the middle of a cul-de-sac that has damaged the road. [Luke Brantley]

WINFIELD — During its meeting on Tuesday, Aug. 17, the Winfield City Council voted to hire the Hand Arendall Harrison Sale law firm out of Birmingham to help the city find out how it can spend the over $500,000 of American Rescue Plan money without incurring any fines for improper usage.
Mayor Randy Price addressed the council and explained that when the city received the funds from the federal government, there were no clear instructions on how the money could be spent.

Maybe there’s something in the water in Hamilton, Alabama.
Maybe it’s the Buttahatchee River? Although as rivers go, parts of it can be pretty dang dry. If you plan on floating down it, you might want to take your walking shoes, unless there’s been a recent rain.  Don’t ask me how I know.
Over the years there have been five songwriters from Hamilton who have written #1 Billboard Hit Songs. Wait, what are the chances of that? Yes, there may be more #1 songwriters from Hamilton than there are working red lights. 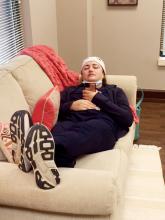 Winfield nurse Lauren Harden was able to catch a short break before heading back to the frontlines at Northwest Medical Center. [Contributed]

WINFIELD – Nursing shortages during the COVID-19 pandemic that began last year mean little rest for those on the front lines.
Nurse Lauren Harden, who is also the Director of Quality/Risk at Northwest Medical Center in Winfield was able to catch a short nap before heading back to the front lines on Thursday, Aug. 19.
Harden had worked four hours in the emergency department and was off to rest for eight hours prior to coming back to work a night shift in the emergency room. 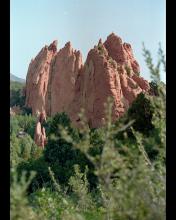 Photos taken during my visit at the Garden of the Gods in Colorado Springs, Colo.
[Louis mellini/staff]

Two weeks ago, I was able to visit Colorado for the first time in a very long time to introduce my two-month-old daughter, Florence, to many family members during my Grandmother’s 80th birthday celebration.
I don’t really remember anything from my last visit to Colorado, I may have been 12 or 13 years old the last time I went, so I was very excited to see various sights that Colorado is so famous for.

Fall is a season of cooler temperatures and changing leaves, and it also marks the return of autumn flavor profiles. Root vegetables, roasts and heartier fare are prime cooking ingredients this time of year. In terms of baking, treats spiced with ginger and cinnamon are in demand each fall.
Carrot cake and oatmeal cookies are familiar favorites this time of year. In this recipe for “Carrot Cake Oatmeal Cookies” from “Live Well Bake Cookies” (Quarto Group) by Danielle Rye, delicious spiced carrot cake is transformed into a soft and chewy cookie.